BlueClaws Up 1-0 in SAL Championship

By Jay Floyd September 15, 2009
Monday night the BlueClaws hosted game 1 of the South Atlantic League Championship and came out victorious over the Greenville Drive by a score of 6-3. The BlueClaws were led by second baseman Harold Garcia, who had a lead off homer in the 8th inning, and catcher Travis D'Arnaud who had two hits, including a double, an RBI and two runs scored.
Garcia, D'Arnaud and the other Lakewood players were joined by two big league Phillies for the series. Clay Condrey pitched a shaky inning in relief, while he continues to rehabilitate his injured oblique. The Phillies also assigned multi-time 2009 call-up Andrew Carpenter to Lakewood for the remainder of the week.
Condrey's inning was difficult. He allowed the first three batters to reach base before finding a groove, becoming loose and downing the next three batters. Condrey allowed a run on a walk and two hits.
Lakewood manager Dusty Wathan said of Condrey, "It's kind of a tough situation for him to be put in", hinting that Clay was there to focus on getting himself right, not on the SAL postseason. Wathan also said, "I think we saw a healthy Clay Condrey the last three batters he faced. As opposed to the first couple. He started to trust himself...and felt a little more confident."
Condrey said of his outing on Monday, "The way I reacted was a little tender with the oblique, I guess. But, the last three hitters all went aside and instincts kicked in a little bit."
When asked if he was favoring his injury, Clay said, "I think I am." Condrey and the Phillies' training staff will wait and see how his oblique reacts before they decide if he's ready to return to the big leagues. Condrey has been out since July.
About Carpenter's role with the BlueClaws, Dusty Wathan said, "We don't know yet. It's totally up to a day to day thing. It'll definitely come from above."
The BlueClaws struck early offensively. Anthony Gose began the night with a big fly that left the park and reached the tiki bar in right center field. Greenville took a brief lead with a run each in the 2nd and 3rd innings, off of Lakewood starter Matthew Way, but the 'Claws struck back with a pair of runs in the third inning on an RBI ground double by Garcia and a single by D'Arnaud that drove home Garcia. The 'Claws never gave up that lead. 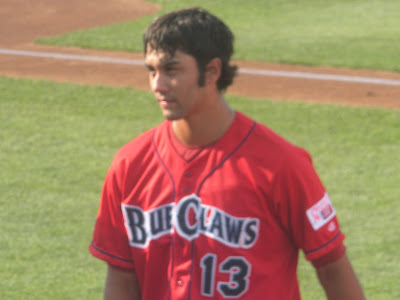 Way struggled a bit through 4 1/3 innings. He walked 4 and gave up 6 hits, but only allowed 2 runs, both earned. Way had walked just 12 batters through 14 professional regular season starts this year. Way was relieved by Luke Wertz, who earned the victory for Lakewood with a scoreless inning of work.

Santo Hernandez closed the game out for the 'Claws, earning the save while striking out two Drive hitters.

The BlueClaws and Drive are back at it on Tuesday night at 7:05pm, when Lakewood righty Jesus Sanchez (10-6, 3.44 ERA) faces righty Caleb Clay (6-7, 4.01 ERA). After game two, the series will move to South Carolina for the remaining games of this best of five series.

Tim Gradoville has been assigned to catch in the Major League Phillies' bullpen, for the remainder of the regular season, now that the Reading Phillies' season has ended.