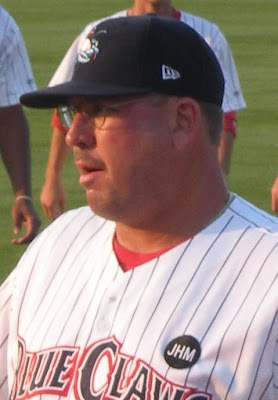 I spoke with Lakewood pitching coach Bob Milacki recently. Just a couple quick questions, mainly about his visit to the double A all star game and the BlueClaws' pitching prospects. Here is what Coach Bob had to say.


Coach Bob, can I get some comments on your experiences at the Double A all star game in Trenton this month?

It was fun. It was fun. I went over there, they called me, 'cause I was born in Trenton...and threw out the first pitch. And they also wanted me to participate in the home run derby (Coach Bob threw pitches to Phillies minor leaguer Michael Taylor in the derby), which is different for me. But, it was fun. I got a chance to see some guys who I coached in previous years with the Pirates, so it was kind of neat. Big crowd.


Were you a choice of Michael Taylor's at all, or did the organizers assign you to pitch to him?

He didn't know I was going to be throwing. He probably would have wanted somebody else. But he did hit one homerun, so it was nice. It was a bomb. I talked to him afterwards. I (asked), "Was it hard seeing me?", because I was coming out of a sign out there in centerfield, 'cause I throw from a high angle. He goes, "Nah! I knew I wasn't winning anyway. I hit one homerun. I usually don't hit that many homeruns in (batting practice) anyway. I may have hit 12 all year." So, he was a really good sport about it.


The guys on the pitching staff with Lakewood...who might you be extremely confident in to have the abilities to pitch at higher levels sooner than later...aside from an obvious name like Jason Knapp?

(BJ) Rosenberg, for sure. He's gonna pitch at higher levels. (Justin) DeFratus. He's gonna pitch at the next level. You got (Trevor) May...probably spend some time here next year, 'cause he didn't start (this season) here, but if he finishes strong, he could (see time early next year) at the next level, 'cause he's learning at a rapid rate. (Jesus) Sanchez has done a great job this year. So, I mean, there's a lot of possibilities. I don't know how many jobs are going to be open next year, so some of those guys who are younger might spend half a season here.