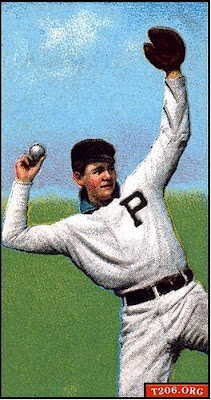 George McQuillan was a pitcher with our Phillies from 1907-1910, and again from 1915-1916. McQuillan is best known for the record he set as a rookie that stood for over 100 years. McQuillan joined the Phillies in the final month of the 1907 season, after winning 13 games in the minors for Providence. He quickly won four of his first 5 starts, which included back to back shut outs of the Reds and Cubs. McQuillan's record of 25 consecutive scoreless innings to start a career was his main claim to fame. The record stood till 2008 when Athletics reliever Brad Ziegler eclipsed the mark.

The next season, McQuillan got off to another hot start, as he won 11 of his first 14 starts. His terrific performances were, at times, hampered by the Phillies' weak offensive outputs. In his first six losses that season, the Phillies scored just 1 total run. In mid-June, he lost 3 straight starts by identical scores of 1-0.

McQuillan's sudden success may have played a role in his impending alcohol abuse. News papers documented accounts of McQuillan "breaking training" at the time. In August 1908, his wife filed for divorce, and McQuillan was virtually a .500 pitcher for the remainder of the season.

McQuillan would spend that offseason playing winter ball in Cuba, though his team folded in mid-season. He returned to the U.S. broke and in poor health, having contracted syphilis and gained weight.

In 1909, McQuillan would make only one start in the first six weeks of the season. Unable to find his rhythm at times, he finished the season with a record of 13-16, which included 4 shutouts. In 1910, his record was 9-6 through 17 starts and he posted a National League low 1.60 ERA. Despite the sparkling ERA, the Phillies had grown frustrated with McQuillan's lack of reliability and alcoholism and he was traded to the Reds after the season.

McQuillan spent the next 3 years with Cincinnati and Pittsburgh, posting a 31-39 total record. McQuillan returned to the Phillies midway through the 1915 season when he was claimed off waivers. His record with the Phils was 5-10 en route to the Phillies first National League pennant.