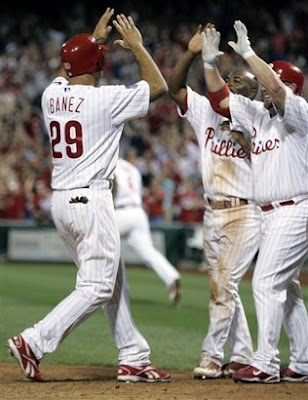 Huge victory by our Phillies on Saturday night!! The Phillies hammered Pirates closer Matt Capps for 5 runs in the bottom of the 9th inning to win the game 8-7. The Phillies are now 7-1 on their current homestand. The team trailed 7-3 entering the final frame, before Matt Stairs hit his 4th pinch hit homer of the season. Four batters later, with Jimmy Rollins and Chase Utley on base, Ryan Howard tied the game with a deep drive into the left-center field seats. The Phillies then loaded the bases and Paul Bako won the game with a single that drove in Raul Ibanez to give Tyler Walker his first win as a Phillie. The series and the first half of the season wraps up Sunday at 1:35pm, when "Jay" Happ (5-0, 3.04 ERA) faces (1-2, 4.50 ERA). The Phillies now enjoy a 4 game lead over the 2nd place Marlins in the NL East.

The Phillies bullpen has been superb on the current homestand. In 23 2/3 innings pitched, the relief corp has struck out 29 batters, allowed only seven walks and surrendered just 4 earned runs. That's a 1.52 ERA in 8 games.

While the GM Ruben Amaro continues to not comment on the Phillies' potential negotiations with Pedro Martinez, ESPN had some footage in the past day or so, of Pedro wearing a Phillies cap at his work out for team scouts on Friday. Below is a very low quality screen grab. 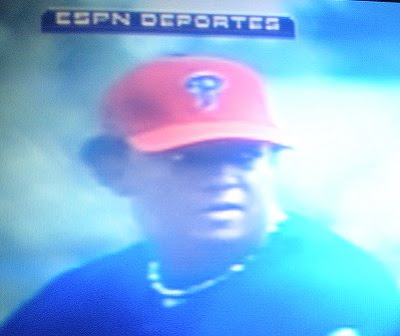 Amanda said…
What an awesome game!

And hopefully Ruiz will start to get back on track.