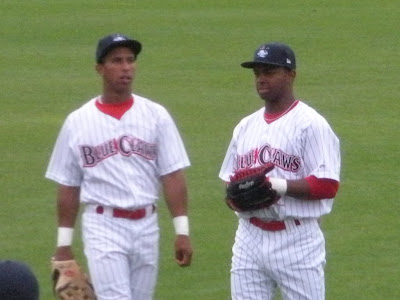 Zach Collier is pictured on the right, beside teammate Anthony Gose.

Zach Collier is an 18 year old outfield prospect in the Phillies system. Collier was a supplemental 1st round pick in the 2008 amateur draft. Baseball America ranked Collier as the 8th best prospect in the Phils' system, earlier this year. Currently batting .226, with 16 doubles and 13 steals for the Lakewood BlueClaws through 79 games, Collier has yet to hit his first professional homerun. I had a chance to speak with Zach on Thursday night after the BlueClaws' loss to Tampa's Bowling Green affiliate and here's how that went down.

You hit a deep fly ball that hit off the top of the wall for a double tonight. It barely missed going out. How much did you want that homerun tonight?
Maaaan, I thought it was going out, but...once it hit the fence, you know, it's happened before, so I just had to get to second base. Don't want to get caught- think you have a homerun and just get on first base. You just gotta hustle every time until YOU KNOW you've got a homerun.

Is getting your first one something that's on your mind at all?
Yeah. (But) everyone's gonna hit that homerun some time in their career, so I mean, when it comes, it comes. I'm not going to keep trying for it.

When publications or web sites rank prospects in the Phillies' system, are you aware of what they say about you and how do you feel about those rankings?
Yeah, I'm aware. But I just really don't look into it or read it. I just do what I have to do. Just trying to make my way to the top, and do what I gotta do.

You've been talked about as a Garrett Anderson type of player. How would you describe your own game or your own skills?
**SWAGGER ALERT!!**
I've heard that a lot. We're very similar. But I just like to compare myself to no one else. I am who I am and when I get to the big leagues, I want people to be compared to me, not me be compared to anyone.

Is there any specific aspect of your game that you're working on improving right now?
Just my hitting....and, well, everything. You can improve on everything. Hitting- just more of, ya know, what pitchers look for in certain situations, getting runs in and (situational hitting). I'll get all the information I can from (coaches) Bob (Milacki), Dusty (Wathan) or (Greg) Legg, you just gotta ask questions and get what you can out of everything.

Can I get an overview of what your draft experience was like last year?
My whole attitude was just, "I'm signing, where I'm signing. Where ever I go, I'm just gonna sign." It's something I really want to do. I was with my agent and I sat there and watched it on TV. I didn't really know where I was going to get picked. I wasn't nervous before the draft, but they started announcing names and I started getting nervous. Finally, when my name was called it was just a big relief.

What do you like off the baseball field?
I like movies. But it's gotta be something I have an interest in. Like, Transformers and X Men, I definitely had to go see those movies.

What's your favorite Michael Jackson song?
That's a hard one. I grew up listening to Thriller, but there's just too many (to pick only one).