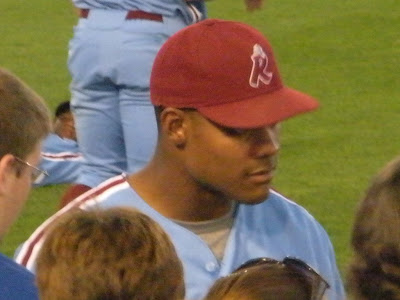 The Eastern League All Star Game takes place tonight in Trenton at Waterfront Park. Five Reading Phillies are on the Southern Division team. 3B Neil Sellers, CF Quintin Berry, RHP Vance Worley, OF Michael Taylor and LHP Joe Savery all hope to help their team win. Michael Taylor, New Britian's Brian Dopirak and the Futures Game MVP, Twins prospect Rene Tosoni, will headline the Homerun Derby that takes place prior to the game. Also competing in the Derby will be two local high school players, who are allowed to use aluminum bats. Plans to have former Major Leaguer and current Trenton Thunder hitting coach Frank Menechino participate in the HR Derby have been nixed.


The starting lineup for the Southern Division team is as follows...

Check back tomorrow for a full review of the evening's Eastern League events.


The speculation has begun regarding where Pedro Martinez will go for his "rehab" starts in the Phillies system. Some have even begun projecting when Pedro will start for the Phillies and have gone as far as when he'll face the Metropolitans. There is still no official word on any of this, as of this writing.

It's PhoulBallz Phillies Wednesday on Fox Sports 1310 AM. The Shore Sports Report begins at 3pm, and I'll be on around 3:30. Check it out every day!