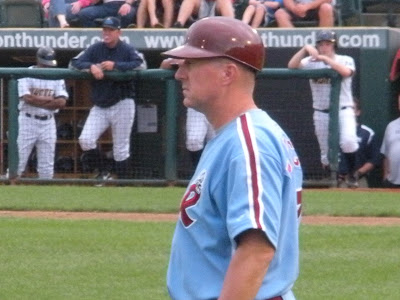 Manager of the Reading Phillies Steve Roadcap took some time to speak with PhoulBallz this week. Roadcap is the 23rd manager for the Reading team. He had spent the previous two seasons managing the Lakewood BlueClaws and prior to joining the Phillies organization, he managed in the Seattle Mariners system. As a player, Roadcap played in the minors for the Cubs. Here is how the interview with Steve Roadcap went down...

Coach Steve, can I get you to comment on the ups and downs with the pitching staff this season?

Yeah, I made the comment earlier in the season...we're young, we're gonna have some bumps in the road, and we've had some bumps in the past month with (Vance) Worley and (Mike) Stutes. Their last outings are positive and we need to build on that. It's a learning experience for them. They had some success early, and they weren't making pitches like they were early, and some things caught up to them. But they continued to work and that's a credit to them that they kept grinding it out.


Has anyone on the team been a surprise to you this season, good or bad?

No, not really. We've caught the ball well. I wasn't sure how well we'd catch it. I just like the way we've been going out there, we've competed and we've played hard. We gotta keep grinding it out and keep working.


Was there a period of adjustment for you this year, coming to Reading?

No, it's still the game of baseball. It's fun managing against National League clubs. But it's still baseball and it's still teaching. Being able to communicate with the players and let them play the game...it's all about them, not me.


Aside from the obvious names, is there anyone on the team you feel is most ready for a step upward, or you're sure could compete at higher levels?

Yeah, (Mike) Zagurski's getting close. You have to understand, he's coming off surgery and it's still a little work in progress and we're watching him carefully. His slider's getting better. His velocity is getting close to where it was before he got hurt. His command is in and out. (Neil) Sellers has had a good first half. He had a good second half last year at Reading...a good first half here, I'd like to see him get an opportunity. It's not my call. He goes out there, he's played every game.


Is there anyone that you've coached or managed in your career that stands out as becoming the most successful?

Adam Jones in the last couple years. You know, great athlete...runs well, played shortstop for me with the Mariners, now converted to the outfield. Great athlete, ball jumps off his bat. He's got a chance to be 20-20 (20 homers, 20 steals in a season) in the big leagues and (he's) just a fun kid to have.


I've seen you in action on the field and you're able to maintain composure when delivering a conflicting message to umpires. Are there any stories you could share of an instance when you did not keep your composure?


I've had my bouts with umpires. (But Steve does not elaborate)


Are there any aspects of the team's play that you think specifically need improvement?

Situational hitting. We need to do a better job....certain guys need to put the ball in play a little bit more. You've got guys that aren't going to hit the ball out of the ball park and there are a couple guys in there now that are struggling, but that's part of baseball. You get your ups and downs and your peaks and valleys. You've gotta hit rock bottom before you can get back up. There are a couple guys in there that are down, but you know what? We've gotta 68-70 games left and they've gotta pick themselves up.

They're a great group of guys. They've been a lot of fun, they all get along. Everybody's open game for a lot of criticism, (there are) a lot of pranksters in the club house. But like I said, they've been fun in the clubhouse, and when they go to the field they work hard.