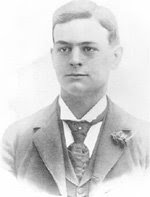 Elmer Flick was an outfielder with the Phillies from 1898-1901. In 1898, the Phillies signed the 22 year old rookie free agent, after he had played 2 seasons of minor league ball. In Flick's first training camp, he arrived with a home made bat he created on a lathe by himself. A week into the season, an injury to everyday rightfielder Sam Thompson allowed Flick to get a shot at some playing time. In his first start, Flick had two singles and never looked back. He ended the season with a .302 batting average, drove in 81 runs and stole 23 bases.

Over the three following seasons, Flick continued to use his speed to his advantage and stole 96 total bases. His quickness also allowed him to cover much ground in the outfield. Elmer Flick's best offensive season came in 1900, when he led the league in RBI with 110 and total bases with 297. He also finished second (to Honus Wagner) in batting avg. at .378.

In 1901, the newly formed American League established a new baseball franchise in Philadelphia called the Athletics. They began luring veteran players, with higher salaries. After the season, Flick accepted a contract offer from Connie Mack's Athletics and crossed over to play in the American League. The Phillies, however, went to court and got an injunction that prohibited any player under contract with the Phillies to compete in Pennsylvania for another team. The A's, faced with the restriction of playing all their home games without Frick, were forced to trade him away. Frick went to play for Cleveland in mid-May. The contract dispute lasted till September of 1903, when the leagues makes peace.

With Cleveland, Elmer Flick would bat over .300 four straight seasons, lead the AL in triples three straight seasons and he won a batting title in 1905. Flick was valued so highly that the team once turned down a deal with the Tigers that would have swapped Flick for a 21 year old Ty Cobb. By 1908, Flick developed a stomach ailment that would limit his playing time and eventually halt his career. By 1910, he was out of the Major Leagues at the age of 34. Flick would hang on and play two more years in the minors before retiring. In 1964, Elmer Flick was elected to the Baseball Hall of Fame.