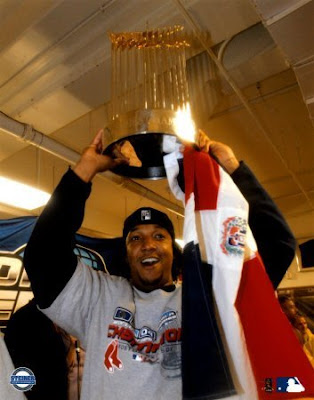 Could future Hall of Famer Pedro Martinez be on his way to the Phillies' pitching rotation? Yes, he could be. He could be the annual mid-level addition to the pitching staff that the team, and its phans, have grown accustomed to. Cory Lidle, Kyle Lohse, Jamie Moyer, Joe Blanton...those are the sorts of acquisitions the Phillies make each year, in July, to make a run at the playoffs. Pedro Martinez is no longer an all star...no longer a Cy Young Award contender...and no longer a staff ace. Toronto's Roy Halladay, who the Phillies were tied to with trade rumors this week, is that #1 pitcher the Phillies always miss out on.

The Phillies don't do what it takes to add a top level, front of the rotation, all star, Cy Young Award winning sort of hurler. The team lets money and the risk of trading away prospects get in the way. John Kruk tells a story about how the 1993 Phillies could have added Randy Johnson in a mid-season trade, but the front office was held up on pitching prospect and top draft pick Tyler Green. Those that remember Tyler Green surely would realize that he did not pan out the way the Phillies had hoped, and surely should not have ever been a breaking point in a deal to acquire a Cy Young Award winning, all star and future Hall of Fame pitcher. The 1993 Phillies team came up short in the post season. Hopefully, if this year's Phillies team passes on getting Halladay, or another staff ace pitcher, they won't come up short. Joe Blanton proved to be just what the rotation needed last year. Blanton came over to the National League and went undefeated in 13 starts, with a 4-0 record, 4.20 ERA and a .246 batting average against, after a 5-12 start with Oakland.

Pedro, who has been working out for Major League teams in recent weeks, pitched in the World Baseball Classic this year for the Dominican Republic. In 2 games, both against the Netherlands, Martinez pitched 6 total innings and allowed no runs while striking out 6. Experts said he looked good...like he could still pitch in the Majors. If the Phillies make Pedro an offer, it will be because they think he could help them win games. It may also end speculation over what the Phillies can offer Toronto for Roy Halladay.

The Phillies' minor leagues are deep with prospects. Each minor league team has begun seeing an increase in ML scouts attending games. Names like the triple A IronPigs' Lou Marson, Carlos Carrasco and Jason Donald....the double A Phillies' Michael Taylor, Kyle Drabek and Joe Savery....high A ball level Treshers OF Dominic Brown....and low A ball level BlueClaws pitcher Jason Knapp are all names that are coveted by baseball big shots. These are all, of course, names that are being tossed around in trade rumors.

If a trade for a top tier pitcher is the move our Phillies chose to go with, and the swap calls for the Phils to give up some of the names I've just listed, don't worry, phans. The Phillies system is plentiful with prospects. That list didn't include Reading pitchers Mike Stutes and Vance Worley, who are holding it down at the double A level after both were drafted just last year. That list also doesn't include Steve Susdorf, a 22 year old outfielder who is batting .397 with a .933 OPS through his first 15 games with Clearwater, after batting .333 with .902 OPS through 21 games with Lakewood earlier this year. The list doesn't have MLB All Star Futures Game pitcher Yohan Flande, who was 7-1 with a 2.52 ERA through 13 starts with Clearwater prior to being promoted to Reading last week, on it. That list does not include Planet Earth's stolen base leader Lakewood BlueClaw Anthony Gose, an 18 year older who is batting .277 with 47 steals in his first full year of pro ball. It also does not include Tommy John Surgery investments Scott Mathieson and Mike Zagurski who are on their ways back to the majors. The farm is deep, my babies. Don't you fret none.

Anonymous said…
I still wouldn't want to give up Drabek or Taylor, no matter what else is in the system.

Jay Floyd said…
I just feel like a prospect is not a lock. A Cy Young Award winner is a greater commodity...and winning now is what's important.

There are ways for teams to stay top tier and still deal away high level prospects. Look at the BoSox...they dealt a slam dunk minor leaguer like Hanley Ramirez and they are still a top team even though Hanley became what he was projected to be. AND they won a World Series with the guys they got- Beckett and Lowell! I'd take a deal like that...Another championship for a "slam dunk" prospect, with the knowledge that the frame work is in place to continue to win.
July 10, 2009 at 4:27 PM