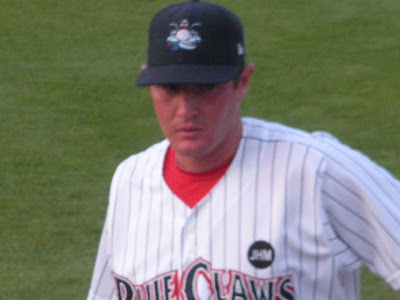 BJ Rosenberg is half of the closer tandem for the Phillies class A Lakewood BlueClaws. BJ splits the duties with Ryan Bergh. A 13th round selection out of the University of Louisville in 2008's amateur draft, Rosenberg was one of six all stars from the Lakewood team this season. Through 29 appearances this season, Rosenberg is 7-2 with a 1.15 ERA, 1.08 WHIP and 14 saves in 39 innings pitched. BJ took time to answer some questions for me the other day and here's how that went down...


Speak a little about your success so far this season, including your all star experience.

Right now, I'm kind of on a roll for a little while. Been pitching pretty well. I've been working on some things, like, fix my mechanics a little bit. Been going good. Gonna keep it going, and the season's just over half way done, still a long way to go. The all star game was fun. I didn't get to pitch, but I guess they were saving me for extra innings, since it was such a close game. It was a great experience (going with my teammates).


Was there any advantage for you coming into this year having spent time with your current manager Dusty (Wathan) at Williamsport last year?

I had a good year last year too and he kind of knew what to expect from me already, coming into this year....and I guess, with a lot of confidence. I love him as a manager. He's a great manager and I'm just happy to be here with him.


Is there any kind of competition, whether for fun or otherwise, between you and Ryan Bergh at all, out there in the bullpen?

No, not really. It's just like, he'll pitch, then I'll pitch. It just depends on whether it's a save opportunity or not. We haven't openly talked about (going at it) or anything.

Fastball, slider...change up very rarely. And I mean, I just prepare the same way every day. First few innings- kind of watching the game and looking at the batters. About the 6th inning, I'll start moving around a little bit. 7th I'll just get my arm going...maybe play catch with the outfielders (between innings). I just take every game- get the same routine going.


What do you think your strengths are and how would you describe your own style?

I think my strengths are just command. I feel really confident in my fastball and my slider. I feel like I can throw them any count, any time, any batter. So, just command of both my pitches. Not to say I'm a power pitcher. I just keep the ball low in the zone and try to get ahead of hitters. That's really just how I do it.


Browsing the internet there are phans that are very interested in you, mainly because you have very solid numbers, but a relatively low buzz factor about you. What could you tell fans about yourself?

I don't know. I'm a pretty low key guy, so I kind of just try to stay out of the lime light. I don't know what I would say. I just try to go about my business and try to keep going every day.


Who was your favorite pitcher growing up?

Nolan Ryan and John Smoltz. Nolan Ryan because of how dominating he was. I didn't get to really watch him growing up, but I saw clips of his no hitters and he just dominated the hitters that he faced. John Smoltz...basically, I was a Braves fan growing up, and he can take over a game easily and he has electric stuff. I found myself really liking him.


Were you more into Smoltz as a starter or a reliever?

Kind of both. I was a starter growing up, so as a starter. But when he started closing, he did so well. I guess that versatility made him more appealing too.


Is there anyone in the system who you think has really contributed to helping you excel thus far in your career?

Dusty- big time and especially Bob Milacki. I worked with everybody pretty equally down in Clearwater for spring training. Their pitching coordinator, Gorman Heimueller...he just worked with me. And really just Bob Milacki has helped me out a lot.


If you could face any batter in baseball, who would it be?

Probably Manny Ramirez. I say Manny 'cause...I haven't necessarily been his biggest fan with his antics and stuff, so I'd like to face him.

The Sandlot. I watched it a lot when I was younger. I just think it's an awesome movie. I could probably watch it every day and never get sick of it.