Nobody Hits (with runners in scoring position)...Boo Hoo!

By Jay Floyd July 08, 2009
The Phillies followed up their 22 run explosion on Monday night with a Will-Ferrell-TV-adaptation-like dud in game 2 of the series against the Reds. Plenty of hits in the game, by our Phils, but failure to hit with runners in scoring position left the team short in the end, and they lost 4-3. The Phillies were 1-for-12 with runners in scoring position, including 0-for-5 with a runner on 3rd base with less than 2 outs, and they left 12 runners on base.

Brad Lidge continued to resemble the exact opposite of the 2008 version of himself. His 7.12 ERA has him sitting as the second worst reliever in MLB this season. Only former National and current Pirate Joel Hanrahan has pitched over 20 relief innings and has worse statistics than Lidge. Hanrahan's ERA is 7.97.

Oh, and hey...Michael Taylor, what do you think of Eric Bruntlett's contributions this season (.141 batting avg. in 45 games played)? 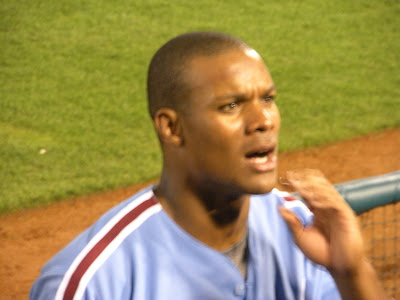 Don't forget that Fox Sports 1310AM's web feed is active world wide. You should be listening to The Shore Sports Report daily from 3pm-6pm. The PhoulBallz Phillies segment will be live in your ear holes today, and every Wednesday, at 3:30pm. Click here to check it out.