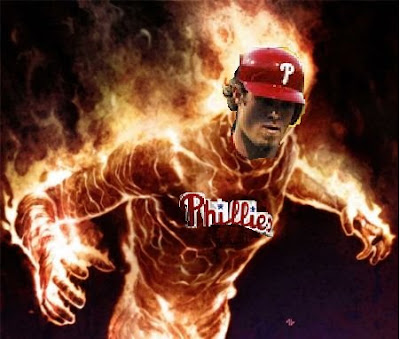 Jayson Werth is on fire! In the 4 game series against the Reds, Werth was 6-for-15 (.400 avg) with 4 homeruns (1 homer in each game), 9 RBI and 5 runs scored. Werth is tied with Chase Utley for 8th in the National League in homeruns and is tied for 3rd in the league in runs scored. He has also reached base safely in 16 straight games. Werth's 20th homerun of the season on Thursday night allowed the 2009 Phillies to become the first National League team to ever have 4 players with 20 of more homers before the all star break.

Seven of the nine NL hitters with 20 or more homeruns are on the all star team. Werth and Diamondback Mark Reynolds are the only two NL 20-homerun guys who aren't all stars. Reynolds was on the final vote ballot that clinched a spot for Phillies centerfielder Shane Victorino. Werth deserves consideration to take the spot that will be left vacant by the injured Carlos Beltran, who was voted to start by fans. National League all star manager Charlie Manuel claimed after Thursday night's game that the choice for a replacement was his to make and that he would make the choice publicly known later. With Shane and starter Raul Ibanez already on the all star team, Werth's selection could make history by locking in the entire Phillies outfield as all stars. Currently without the proper resources, I can't say for sure with what frequency something like that occurs, but it is certainly rare.

**Afternoon update!**
Charlie Manuel made his choice this afternoon for Carlos Beltran's National League all star roster replacement. Guess who? Yeah, Jay-Dubya. It's the first time all three members of the same outfield have been named to a Major League all star team since the 1995 Cleveland Indians did it. The hitting coach for that Indians team was none other than Charlie Manuel.

Dan said…
If the Phils add another solid arm in the rotation--Halladay, maybe Pedro--I will start to be afraid of them. With Werth playing this well, Utley and Howard hitting, Victorino on a tear, and Ibanez due back, they are scary.
July 10, 2009 at 2:04 PM

Jay Floyd said…
It's fun this week. Hopefully, they keep winning and it stays that way.

Certainly, if the Phillies can make an impact addition (or two) to their pitching staff, the team would scare a lot of people around baseball.
July 10, 2009 at 4:22 PM