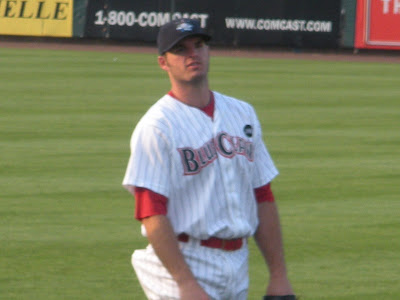 Lakewood BlueClaws first baseman Jim Murphy was a 17th round draft selection in 2008. Over his time with three Phils minor league teams last year, Jim hit .281 with 5 homers and 30 RBI. Murphy is currently batting .289 with 9 homers and 48 RBI with an .874 OPS this season through 78 games with Lakewood. I had a chance to speak with Jim recently and here's how that went down.


Jim, can I get you to speak a little about your draft experience last year?

Yeah, I thought I'd probably be between the 15th and 20th round. I figured I'd get picked up somewhere around there. And I was driving back home, across the state- I went to school in the eastern part of Washington State- and I was driving back to see my family. I actually got the call when I was driving across the mountains, from our sports radio guy. And he was actually the first person to call and tell me. I didn't hear from the Phillies till after her called. That was kind of interesting.


How did you celebrate, once you got to your family?

I just went out to dinner, with my immediate family, then went out with some buddies afterwards down in Seattle...it was a pretty good time.

Was there any kind of adjustment period or transition for you, coming from out west to play on the east coast last year?

Not specifically. Ya know, playing summer ball and college kind of gives you some of the experience already....playing 2-3 months somewhere away from home. Coming out of college too, it helps- you're not really used to being home anyway. It wasn't that big of a transition for me.


Do you participate in the BlueClaws' rain delay dance routines and can you speak on those?

I try not to. I let the other guys try to do that. It's pretty fun, man. They kinda figured the game was going to get canceled. We got a lot of guys in here that like to dance around the locker room...so when it came on, they started a dance off and we were shocked when Greensboro did the same. It was pretty funny.


Is there any advice that you might give to teenage players who hope to play beyond high school age?

Yeah, you never know who's watching or when it can happen. Every day, do something to try and make yourself better. It could be anything from running to taking extra ground balls. That extra stuff you're doing, some other guy might not be doing, and that's can be the thing that separates you later.


What was your favorite team and player growing up?

I was a big Mariner/Red Sox fan. My dad's from Boston and I grew up in Seattle. I liked Jay Buhner a lot in Seattle. He was always one of my favorites.

I'd say For Love of the Game. I really like Kevin Costner and there's a lot of stuff in there that kind of relates...