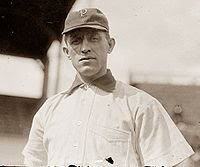 William "Kitty" Bransfield was a first baseman with the Phillies from 1905-1911. A slick fielder, Bransfield developed a reputation for his solid defense when he established himself as a starter with the Pirates prior to landing in Philadelphia. With Pittsburgh, Bransfield won 3 straight NL Pennants from 1901-1903. Following the 1904 season, Pittsburgh traded Bransfield to the Phillies, along with Otto Krueger and Moose McCormick for Del Howard.

Pittsburgh would regret the trade, as they would struggle to find a suitable replacement for over a decade. The press and fans dubbed the deal "the Bransfield Curse".

Bransfield was known to play a considerably deep first base, positioning himself out near the edge of the outfield grass. He felt it gave him an advantage at fielding ground balls in the hole. However, it meant that if a ball was hit to any other infielder, Bransfield would need to drop his head and run hard to the first base bag, in hopes of arriving at the same time as an anticipated throw. Bransfield once told reporters that in his four season with the Pirates that he never once saw shortstop Honus Wagner field a ground ball.

On July 11th, 1910, Kitty drove in 8 runs in a game against his old team, the Pirates. That mark still stands as the top single game RBI total in team history, although it has been tied by 4 other players, most recently by Jayson Werth in 2008.

By the following season, Bransfield's contributions were on the decline as his age and a knee injury kept him from covering much ground in the field. That led to the Phillies sending Bransfield to the Cubs for cash. After playing in just 3 games with Chicago, Bransfield returned to the minor leagues as a player/manager. He also worked as an umpire in the minor leagues before he retired to his native Massachusetts.