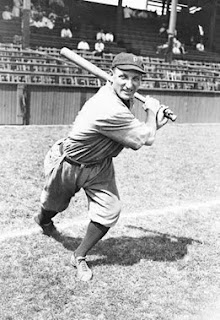 John "Hans" Lobert was a third baseman with the Phillies from 1911-1914. After catching on as a regular with Cincinnati early in his career, Lobert was traded to Philadelphia in a package with Dode Paskert for George McQuillan and a few other players, following the 1910 season.

Lobert was nicknamed Hans, a familiar form of Johannes, the German version of his given name. Honus Wagner, a teammate of Lobert as a rookie who was sometimes also called Hans, dubbed Lobert "Hans Number 2".

In his first season with the Phillies, the Wilmington Delaware native, Lobert, drove in a career high 72 runs, batted .285 and stole 40 bases.

At the Polo Grounds in 1913, Lobert demonstrated his speed by defeating Giants rookie, former Olympian, Jim Thorpe in the 100-yard dash. The following off-season, Lobert was invited by Giants manager John McGraw to join a group of players on a barn storming tour of Europe and Asia. Following the 1914 season, Lobert was prepared to leave the Phillies to sign a bigger contract with the new Federal League, but he was convinced, by McGraw, to stay with the Phillies until a trade could be worked out with McGraw's Giants. Lobert impressed McGraw so much with his speed, that McGraw was convinced that Lobert was the missing piece that could help the Giants get back to the World Series.

The trade was not very successful, despite the Giants return to the World Series. In Lobert's 3 seasons with New York, the Giants finished 8th, 4th and won the pennant in the 3rd season. The improvements were not directly attributable to Lobert's presence as he played just 50 games or less in two of his three seasons there. Lobert's production was hindered by knee injuries and he retired after that 1917 NL Pennant season.

In 1918, Lobert became the varsity baseball coach at West Point, where he stayed through 1925. He then began scouting for the Giants and would later coach for them. In 1934, he returned to Philadelphia as a coach and would manage the team for one season in 1942, becoming one of baseball's oldest rookie managers at the age of 60. He then returned to Cincinnati as a coach for two seasons. Lobert would then go on to scout for the Giants until he passed away in 1968.

Joe Linden said…
best sunday school i know of. then again any other sunday school usually consists of nuns hitting kids with rulers... so it kinda wins by default.