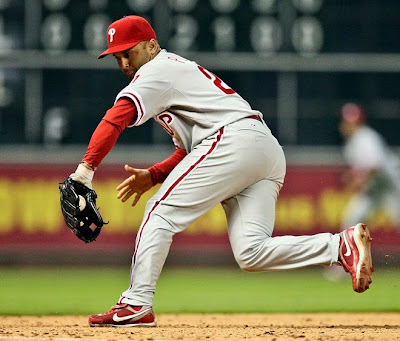 Placido Polanco is struggling lately after being hit in the elbow by a pitch from the Braves' Tim Hudson last Wednesday in Atlanta. Polanco left that game early, after going 0-for-2 in that contest, and sat out of the lineup the following day, to rest and recover from the injury.
Polanco also sat out of Sunday's starting lineup before he pinch hit in the match up with the Diamondbacks.
Since the errant pitch, Polanco has seen his batting average fall 76 points. In the period since the injury, Polanco has gone 2-for-20 (.100 avg) with just 1 RBI and no runs scored.
Polanco, speaking to the media on Monday, talked about his injured elbow, "It's getting there. I'd say it's about 80 percent."
In recent games, Polanco has been wearing a protective guard on his elbow, while batting, to avoid further injury.
While the strife Polanco has been dealing with is a concern, this type of slump is bound to happen to a player during a season. If Polanco was batting .397 at 100%, it wouldn't make sense that he'd bat .100 at 80%, so perhaps Polanco over shot his evaluation of his own elbow, or his recent slide isn't fully related to the elbow at all.
-----------------------------
As PhoulBallz.com informed you last week, Joe Blanton will be taking the hill tonight, on regular rest, for the Phillies Double A affiliate Reading, in another rehab assignment. Blanton has be on the disabled list since spring training with a strained oblique. The Reading Phillies will face the Harrisburg Senators and starting pitcher Matt Chico, who is trying to get back to the Majors after elbow surgery in 2008.
Blanton is expected to rejoin the Phillies next week, if all goes well in tonight's start with Reading.
------------------------------
Reminder...today is PhoulBallz Phillies Wednesday on The Shore Sports Report. I'll be on with Joe & Mike talking baseball around 3:20pm today. Listen to the show on the air on WOBM AM 1160 and Fox Sports 1310 AM in New Jersey. You can also listen over the internet by clicking this link.

OBC said…
Different ballgame when Rollins, Lidge, Blanton and Happ get back! Damn straight.
April 29, 2010 at 1:57 AM