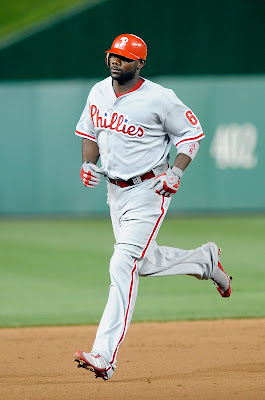 Thursday, 4:35pm. Kyle Kendrick (2009 stats- 3-1 record, 3.42 ERA) vs. Craig Stammen (2009 stats- 4-7 record, 5.11 ERA). The Phillies offense has been strong in the early going, posting 19 runs over the first two games of the season. It'll be up to Stammen to try and shut down the potent Phillies line up. Stammen, a righty, did not face the Phillies in his rookie season last year. Stammen, after the all star break, was 2-3 with a 6.00 ERA in 9 starts. Kyle Kendrick takes the ball in place of the injured Joe Blanton. Kendrick has faced the Nats 6 times and in those games has a 1-2 record with a 5.06 ERA and a .289 batting average against.
Nats third baseman Ryan Zimmerman is 6-for-11 (.545 avg) against Kendrick in his career, with 3 doubles and a homer. Zimmerman is a career .270 hitter with 10 homeruns in 77 games against the Phils.
Ryan Howard has hit a homerun in each of the first two games this season. In 92 career games vs. the Nationals, Howard has a .275 avg. with 32 homers and 89 RBI. In 20 games at Nationals Park, Howard has hit 9 HR's, which is the most by any visiting player.
Relief pitcher Nelson Figueroa is expected to join the Major League club today, after a flight early this morning.
The Phillies won their first two games of the season for the first time in 7 years and have won 14 of their last 15 match ups with the Nationals. The Phils have not swept a season opening series since 2001 against the Marlins.
--------------------------------------------