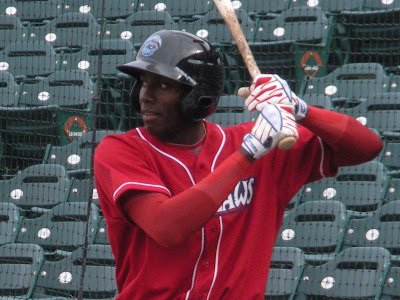 Jiwan James is the starting center fielder for the Phillies single A affiliate Lakewood BlueClaws. The switch hitting 21-year-old is a converted pitcher, who was drafted in the 22nd round of the 2007 amateur draft. He is ranked as the 11th best prospect in the Phillies minor league system by Baseball America and has been called the best athlete in the system. Thus far through 11 games this season, Jiwan is batting .245 with a homer, 10 RBI and 7 runs scored. I had the opportunity to speak with him this weekend. Here is that interview...


How was the home opener on Friday night...the ballpark, the vibe here in Lakewood?

You can just feel the energy in the stadium. Playing on the road, we didn't have as many fans as we did tonight. We were just waiting for the day to get here, to see the stadium, and then, once we did, it was all about the fans.


What are some specific goals you have for the 2010 season?

Just to have a good year. Please the fans and that's about it really.


How about a repeat for Lakewood as South Atlantic League champs? Was seeing the championship banner raised on opening night an inspiration at all?


Can I get some comments from you on the transition from pitching to being an everyday player?

I wasn't as hard as people think it was, 'cause I was playing everyday for years. During the season, off-season (as a pitcher) I'd sneak down to the batting cage. I wanted to play everyday, so it was not that hard really. Just a matter of putting the extra work in and trying to catch up.


Baseball America has you ranked 11th in the system. How do those sorts of reviews and that type of recognition effect you or impact your frame of mind as a player?

I try not to think about it really. That's all politics...what people think about you. It really has nothing to do with the way I am going to play on the field or anything else.


What is new BlueClaws manager Mark Parent like as a coach?


What is you favorite baseball movie?

I'm going with Sandlot. I grew up watching The Sandlot everyday. Right across the street from my house, we grew up playing on a little field, and we called it The Sandlot actually, once the movie came out.


If you had the opportunity to give advice to teenage kids hoping to play baseball beyond high school, what would you tell them?

Go out and prepare everyday as if it was your last. Everyday that you don't work, somebody else is. Somebody is working, trying to get the same spot that you want. So just go everyday and give it what you've got.


Who was your favorite player growing up?

Derek Jeter. He plays the game the right way, everybody likes him, never does anything wrong. He's a great person to look up to.