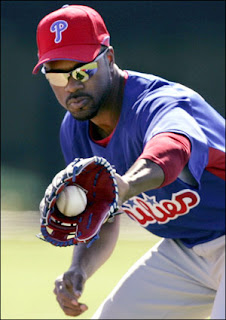 As was expected, Phillies shortstop Jimmy Rollins is headed to the disabled list with a calf injury. Rollins felt pain during warm ups prior to the Phillies' home opener on Monday and was quickly removed from the starting line up. The calf tear occurred just moments after the dramatic entry of the team from the street behind the ballpark, through Ashburn Alley and a crowd of people forming an aisle from the outfield wall toward the infield, and following the introduction of the roster & starting lineup, before the sell out crowd.

Infielder Wilson Valdez will be called up to take J-Roll's place on the roster. Valdez is 10-for-22 (.455 avg) with 5 RBI in 5 games thus far for triple A level Lehigh Valley.

General Manager Ruben Amaro Jr., speaking to the media today, stated the team expects a 2-4 week recovery for Young James. Readers should be reminded that Greg Dobbs missed time last season with a calf injury that was NOT a tear, and he was out 25 days. It is far from likely that Rollins will see a similar, or shorter, shelf time with a worse injury than Dobbs had. So, it's possible that the tear is actually a strain, or that Amaro is spinning things for the better right now.

*UPDATE*
It seems as though Charlie Manuel was misinformed or misspoke when discribing Rollins' injury to the folks at Sirius XM. In a press release, the Phillies discribe the injury as a strain. Here is an excerpt from the release...
An MRI taken yesterday at the Rothman Institute at Thomas Jefferson University Hospital revealed a Grade 1/Grade 2 strain of the right calf. Rollins suffered the injury during pre-game warm-ups moments before Monday’s game against the Washington Nationals. The DL stint is retroactive to April 13.

As we suspected, if the time frame was 2-4 weeks, like Amaro said, the injury is not a tear. More updates, as they become available.

Don't forget that today is PhoulBallz Phillies Wednesday! Check me out on The Shore Sports Report talking baseball at 3:20pm. Tune in near the Jersey Shore on WOBM AM 1160 and Fox Sports 1310am....or listen via their web feed by clicking this link.