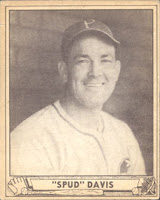 Virgil "Spud" Davis was a catcher with the Phillies from 1928-1933 and again from 1938-1939. Acquired in May 1928 from St. Louis, along with Homer Peel for Jimmie Wilson, Davis quickly built a reputation as one of the best hitting catchers in the game. Beginning in 1929, Davis hit over .300 for 7 straight seasons, the first 5 of which were for the Phils.

Davis, a native of Birmingham Alabama, was more of a doubles hitter than he was a homerun basher. His single season high in homers was 14, which he did twice with the Phillies.

One of the 14 homer seasons came in 1932, when Davis drove in 70 runs and had a .336 batting average. He followed that up with an equally impressive season in 1933 when he batted .349 with 9 homers and 65 RBI in 141 games. That season, Davis also received votes for the National League MVP award. The only reason Spud Davis would have won the NL batting title that season, if not for his teammate Chuck Klein who had a .368 batting average.

Unfortunately for Davis, his success was his very likely undoing with the Phillies. Spud, more or less, priced himself out of Philadelphia. Unable and/or unwilling to re-sign Davis to a bigger contract, the Phillies dealt Davis back to St. Louis, with Eddie Delker, for familiar catcher Jimmie Wilson.

Davis would spend the next five seasons with the Cardinals, winning the World Series with St. Louis in 1934, before his contract was purchased by the Reds following the 1936 season. The Reds returned him to the Phillies, as part of a trade, in June 1938.

In 87 games played with Philadelphia in 1939, Spud Davis had another season with a batting average above .300, when he batted .307 for the Phillies.

Davis finished his playing days with 4 season in Pittsburgh, although his career in baseball lasted plenty longer as he would go on to work mainly as a scout and even briefly managed the Pirates in 1946 for three games.