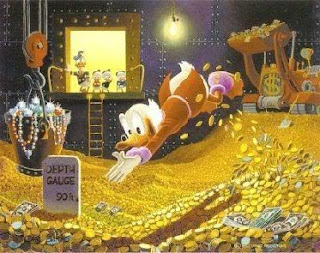 The Major League Baseball Players Association announced, via a press release, on Tuesday that the average MLB player's salary for the 2010 season will be a remarkable $3.3 million.

The announcement was prompted by an inaccurate report on Monday, by USA Today, that stated that the average MLB salary was down by 17% over the opening day payrolls of just a year ago. In an obvious effort to get their brag on and put their members' big time income on blast, the MLBPA wanted to quickly let the world know that there was no way the average salary went down and that, in fact, the average salary had increased for the sixth straight season.

The 2010 figure is based on the salaries of 828 players, including those who are currently on teams' disabled lists, and does not include players' bonuses. The press release also stated that the full combined payrolls of all 30 MLB teams is over 2.7 BILLION dollars, more than $55 million over opening day 2009.

Looking for a moral to this story? ...Teams keep on spending. The Phillies, who are fourth among MLB clubs in team salary this season, at $141.9 million, were 14th among teams when they ended their 13 year post season drought in 2007.

Looking back 25 years, to 1985, the Phillies' team payroll was $11.7 million. This year, the Phillies have 4 players on the team earning more than $11 million (Roy Halladay, Brad Lidge, Ryan Howard & Chase Utley). And as an added stunner, 25 years ago, there were no players in the Majors who made the current average player salary.

As you recover from all those staggering numbers, allow me to remind you that phans are raising money to produce a statue to honor long time Phillies announcer Harry Kalas.

This has been PhoulBallz.com, a place where we remind you that a rich man's story is always more interesting than the poor man's tale.