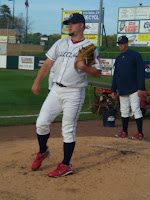 Phillies starting pitcher Joe Blanton appeared with the single A Lakewood BlueClaws in his first rehab outing on Tuesday night, as he attempts to recover from an injured oblique muscle. Blanton, the Phillies 3rd starter, has been resting and recovering on the disabled list, since March 31st, when he injured his oblique during a bullpen session.

The injury was not something Blanton saw coming at all. "I threw a pitch in the bullpen, thought I felt something. I didn't know if I just kinda pinched my side, or something grabbed, or what. Then I threw another pitch and it felt like somebody stabbed me in my side," Blanton said when discribing how he experienced the strained muscle.

While warming up prior to the game in Lakewood, Blanton expressed frustration, as he wasn't displaying the type of control he expected of himself, early on. A few of his warm up pitches went wide and in the dirt, but none of that translated into the game action, as Blanton displayed excellent command, shutting down 3 batters in the first inning, then topping that with a 6 pitch 2nd inning. Blanton threw first pitch strikes to 4 of 6 batters and threw 11 strikes out of 13 pitches.

When asked about his command, Blanton, who last pitched in a minor league game in 2004, told the media, "I pretty much counted on good command. It wasn't a lot of time off from throwing." Blanton stated that throughout this trip to the disabled list, the first of his career, that he only missed about 9 days of throwing. He has been increasing his distance and staying active throughout his down time.

Looking a bit more lean, Blanton appears to be in better shape than phans may be used to. Asked if he's changed his diet or training routine, Blanton stated, "Not really. I've just been going about the same as always. Just trying to work hard and get better every year."

Blanton's time frame for a return to the Major League Phillies is still up in the air and depends on his progress through rehab work, but a target date of early May looks realistic. A Phillies representative was overheard saying that Blanton will pitch Friday in (double A level) Reading. That would be an longer outing than his two inning effort in Lakewood (possibly 50 pitches), and would set Blanton up to pitch again on Wednesday, April 28th, if he goes on regular rest. Reading is the only one of the three local teams that is home on that date.
The BlueClaws won the game against the Hagerstown Suns 4-3 in 11 innings. The team plans to auction off the uniform Blanton wore on Tuesday benefit BlueClaws charities.