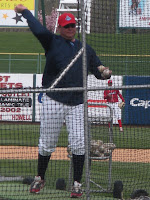 Mark Parent is the new manager of the reigning South Atlantic League Champions, the Lakewood BlueClaws. Parent, a former Major League catcher, played for the Padres, Orioles and Phillies among other teams during his 13-year playing career. Parent has managed in the Mariners' system and spent some time as the skipper of the Chico Outlaws in the independent Golden League. Hired back in December to lead the BlueClaws, Parent now plans to target a repeat as league champions. I spoke with Mark on Friday, and here is how that went down.


What would you say the team's biggest strengths and/or biggest weaknesses are in the early going thus far?

Well, in the early going, that one inning. Pitching-wise, the weakness we've had is the one inning that we kind of lose focus, or try to get a little cute, or you know, like a guy's throwing 95 and we decide to throw an inning of change ups and breaking balls...we get behind hitters, then throw the fastball and they can catch up to it, if they know it's coming. And that happens more than it should. And, just grinding out at bats. I mean, lately we've had some pretty good at bats, we've just left some guys in scoring position. We've gotta put the ball in play more. We strike out too much. Make the other team make plays too.


What were your first impressions of your home field, FirstEnergy Park, today (Friday was the first time many BlueClaws saw their home field)?

It was outstanding. What they do here, along with the Phillies is fabulous. I mean, I can't fathom being in A ball, when I played, and playing in a stadium like this. The way the fans treat the players, and the way the front office and the organization here with the BlueClaws goes out of their way to help them out, I think it's a good place for these kids to mature as baseball players.


From what you've seen from your players so far, are there some names you could toss out as players you are confident will succeed at higher levels in this sport?


I know that you've got a son that's the same age as some of your players. Does that have any effect on how you manage your players?

Well, you gotta expect that they're going to make mistakes, just like your own kids would. I have a 19-year-old son playing baseball at UC Santa Barbara. He messes up and it's just how you go about fixing whatever you're doing wrong. If you're having trouble at the plate, go work at it. Get better. You have a small window here to get better, so our job is to be there for them and ready for the to want to work.


Prior to meeting your players, what had you heard and what were your impressions of some of the guys?

I wanted to go in with my own opinions and in spring training, we meet every day. I found out what I needed to know from the guys who've watched them, but most importantly, I just wanted to see them work. I wanted to see how they work for me...how they fit in the organization and how they fit into our ball club. These guys are low A guys, who have to compete here, to go to the next level. There's four steps up the ladder for these guys and some of them will have the opportunity, but they have to mature first.

You know what? The one that caught my attention recently was "For Love of the Game". I thought Kevin Costner did a pretty good job. I just thought, being an older player, I could kind of relate to him sitting by himself in the dugout and seeing the game going on and seeing other things. I thought it was great how they portrayed it.