Shane at the Top- Good or Bad? 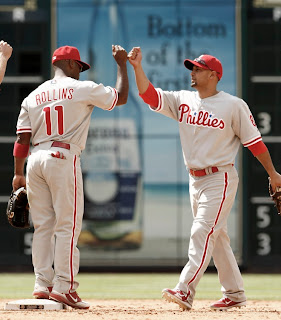 With some serious concern over how the Phillies' lineup might perform with Jimmy Rollins out due to injury, the team exploded after getting behind by 3 runs early Wednesday, in their first game since Rollins injured his calf at the home opener on Monday.

Shane Victorino, the man assigned to take over the lead-off spot in the batting order for the absent Rollins, had a tremendous night at the plate. Victorino came within a double of being the second player in Citizens Bank Park history to hit for the cycle. Victorino went 4-for-5 with 5 RBI and 3 runs scored.
The initial concern was probably in direct correlation with Victorino's career numbers batting in that lead-off spot. Prior to last night's contest, Shane's stats batting 1st in the lineup looked like this- 44 games, .227 batting avg., 7 doubles, 1 triple, 3 homers, 31 runs, 14 RBI, with an on-base % below .300. In 15 games batting in the lead-off spot last season, Shane batted .200, had a .264 on-base % & had 8 runs scored, but in 14 games batting first in the batting order in 2008, Shane had a .327 avg., with a .403 on-base % & 13 runs scored.
Victorino's production varies no matter where he bats in the order. He batted mostly 2nd in the lineup in 2009 and put up a .307 batting avg & a .370 on-base % in 124 games there. In 81 games batting in that same spot in 2008, Victorino's batting avg. was much lower, at .263 but he still produced a .335 on-base %.
With all that variance in mind, let's just consider that Victorino is a career .283 hitter with a .346 career on-base % and he's got speed. Certainly, he's the best option to bat lead-off at this time, and if his 2010 lead-off debut is an accurate indication of things to come, the first place Phillies will be just fine for the foreseeable future, until Jimmy Rollins returns from his injury.
----------------------------------
Be sure to follow PhoulBallz.com on Twitter HERE.