By Jay Floyd April 05, 2010
The Phillies got the new season off to a great start on Monday, as they pounded the Nationals 11-1, in Washington DC. Led by Roy Halladay's 7 strong innings and Placido Polanco's bat, the Phillies won their first season opener since 2005 when Jon Lieber was the winning pitcher for the Phils. 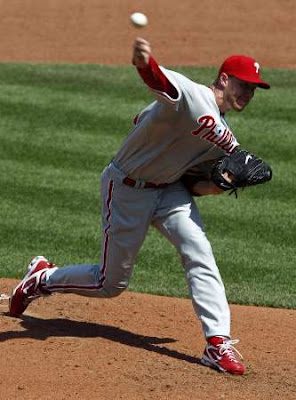 On a day when President Obama threw out a very wide ceremonial first pitch, Halladay got off to a bit of a shaky start, as he allowed the Nationals to score in the opening frame, when Ryan Zimmerman slugged an RBI double off the right-centerfield fence. Following that inning, however, Halladay really settled in and kept the Phillies rolling along as he shut down opposing batters with under 10 pitches in multiple innings throughout the game. In 7 innings, Halladay struck out 9 batters on 88 pitches. 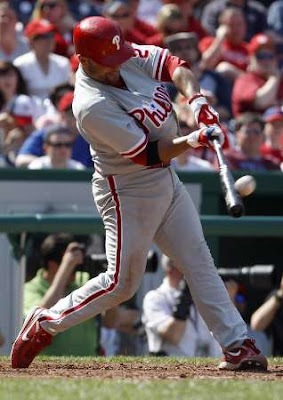 On the offensive side, it was a nice return to regular season action with the Phils for Placido Polanco. Polanco had a sacrifice fly in the 4th, to cap off an inning where the Phillies sent 11 batters to the plate and took a 5-1 lead. He added 3 hits, including a grand slam in the 7th inning to complete the scoring for the day as the Phils went up by 10 runs. Polanco, who was traded to Detroit by the Phillies in 2005 and re-signed with Philadelphia this past off-season, had 6 RBI on the day.

In true Philadelphia phashion, phans traveled to DC in abundance and seemed to perform as the team's 10th player, rattling Washington pitchers and adding to the discomfort level for the fans of the home team, who seemed to flood out of Nationals Park following the Polanco Slam.

mvr joe said…
So the big question is can we lead the east from the first game to the last?