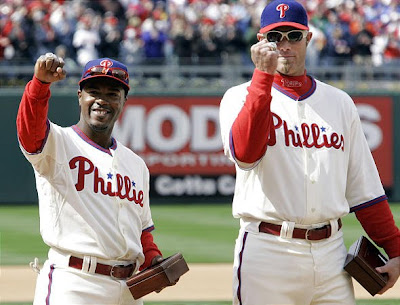 Opening day ceremonies had been completed, the lineups had been announced and the players took the field to warm up, while United States Navy Leap Frogs parachuted into short centerfield to deliver the first balls to the field. During sprint and stretch time, Phillies shortstop Jimmy Rollins felt pain in his right calf muscle and was quickly replaced as the leadoff hitter in the Phillies batting order by Juan Castro.
Some folks have blown off any worry about about Brad Lidge's current injury and delayed debut to the season for Brad Lidge, as he had a similar set back in 2008 and parlayed that into a "perfect" season and the Phillies won the World Series. Well allow me to remind you that Rollins experienced an injury (to his ankle) and a trip to the disabled list in April 2008, returned in May, and that same championship result happened. Omens? Perhaps.
With a MRI scheduled for today, Jimmy's Red Bull promoted "longest batted ball" record stunt was postponed, with little mention.
It is unknown how long Rollins could be out of action, but a trip to the disabled list is looking very likely at this time. Greg Dobbs spent time on the disabled list late last season with a calf injury and he missed 25 days or so.
Jayson Werth also left Monday's home opener against the Nationals with an injury. Werth experienced pain in his left hip and was removed from the game as a precautionary measure. The ailment is not considered to be very serious and Werth is not expected to miss much time. He could be back in the lineup when the Phillies return to action on Wednesday.

**UPDATE**
In a statement released by Phillies general manager Ruben Amaro Jr. Tuesday evening that no decision on Jimmy Rollins will be made until Wednesday, when the team has an opportunity to meet.
A trip to the disabled list still seems likely, as Rollins was seen leaving his doctor wearing a mobile cast, commonly known as a "boot".
Options for a replacement to be called up, should Rollins be placed on the disabled list, include Cody Ransom, Wilson Valdez and Brian Bocock. Some speculation even has Jayson Werth's hip injury potentially playing a role in moves the Phillies could make, as Werth could be out of the lineup this week without a trip to the DL, leaving a more dire need in the outfield and right handed pinch hitting spots as Ben Francisco would be called upon to start in right field. Also, Placido Polanco could play shortstop in a pinch, while Juan Castro can play 2nd base and Greg Dobbs & Ross Gload can both play 3rd base and 1st base.
------------------------------------
Follow PhoulBallz.com on Twitter HERE.