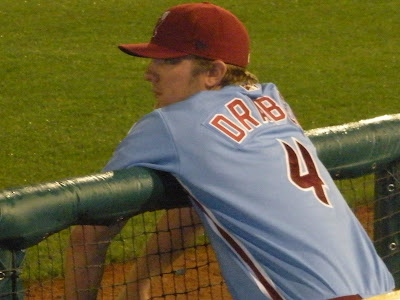 Kyle Drabek, former top draft pick of the Phillies in 2006, is currently pitching with the team's double A affiliate in Reading. The Reading Phillies' ace is currently 4-0 with a 2.43 ERA in 5 starts at the double A level this season. Combined with his single A level stats from Clearwater, Kyle is 8-1 with a 2.46 ERA overall in 2009. Kyle's father is former Pirates pitcher Doug Drabek. Kyle took some time last night to answer some questions for PhoulBallz.com. Here is a look at how that went down...


Kyle, can I get you to talk about being invited to play in the MLB Futures Game and how excited you are for that?

Really excited. It's an honor to be selected for something like that. The past players that have been there, I mean, to be going to the game is just amazing.


Were there some advantages growing up with a Major League pitcher for your father?

I'd have to say there's a few. Being able to learn from him every day, whenever I wanted. Just growing up with him, he taught me a lot about pitching, hitting, pretty much just everything about baseball. And it was just great. I love him.


With the NBA draft the other day, NHL draft this weekend, MLB draft a few weeks ago...I wanted to ask you about your draft day. Feelings, who were you with...?

Just real excited for the draft. I had my whole family, some of my teammates- most of my teammates from high school-, bunch of my friends, so it was kind of a bunch of people. My dad was watching the internet, and he told me when I got picked, and it was amazing. I couldn't believe it.


Is there any part of your pitching repertoire or your game that you are still working on improving?

Change up, really. Just in the bullpen- still working on every pitch, and location. But I'd have to say more on change up.


The ML Phils have some injuries to the pitching staff. If you were to get called into the office, and (manager) Steve Roadcap told you that the big club needs you in Atlanta on Wednesday, how would you feel?

I don't know. I know that I'd be real excited.

If they want me, I'll be ready for it!


If you were to hear your name attached to trade rumors, how might you feel or what might you think?

I really didn't listen to him that much. "Thriller" kind of sticks out.