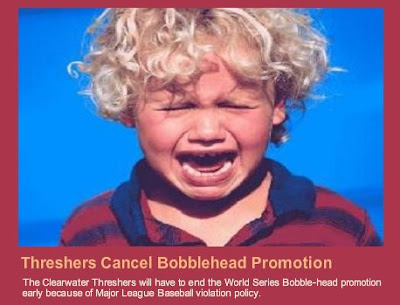 Well, the Phillies beat them in the World Series. They fired back in the off-season by signing our free agent left fielder Pat Burrell. Pat has not performed well offensively for Tampa, due to an injury. Next step for the Rays to get back at the champs?...Act on a rarely used clause, in an agreement between Major League Baseball and Minor League Baseball, that allows a Major League club to prohibit promotions by a minor league team within 60 miles of their home. Friday's bobble head give away by Phillies single A affiliate in Clearwater, FL was slated to be the third in a series of figures from the World Championship lineup of the 2008 Phillies. The Rays have nixed tonight's Burrell bobble, as well as any future World Champs bobble figure promotions.

PhuturePhillies.com has the full low down. The Clearwater Threshers are forced to apologize to their fans. Some Tampa paper has an article about it and apparently the Rays employ someone named Rick Vaughn. Rest easy, Phils phans...as my buddy Mikey B points out, our team has these, the Rays never will.

Anonymous said…
I originally broke this story last night, and was completely fired up about it. Glad to see that the word has spread like wildfire on the net. Thanks for helping out the cause.
June 12, 2009 at 11:36 PM

Threshers Nation said…
I originally broke this story last night on my site, and at Phuture Phillies. Thanks for helping to spread the word.
June 12, 2009 at 11:41 PM