Sell the Ball Park...Phillies Need to Stay on the Road! 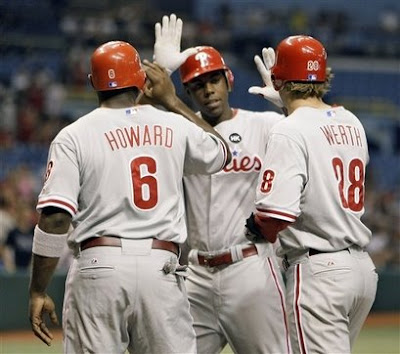 After an awful home stand where the Phillies went 1-8, the defending champs bounced back on Tuesday night with a 10-1 victory against the Rays. The win for the Phillies improves their road record to a Major League best 24-9 (.727 winning percentage), while their home record is second worst in the majors (13-22). I'm pretty sure most phans would be in favor of the Phillies relocating some of their home games, going forward.
Despite Jimmy Rollins' 0-5 effort out of the lead off spot, in game 1 of the series in Tampa, he scored a run. Since the Phillies won the game, that improves the team's record to 28-7 (.800 winning percentage) in games that Rollins plays and scores at least one run. In games that Rollins plays and does not score a run, the Phillies are 8-23 (.258 winning percentage). That's surely proof that Rollins is key for the Phillies as a table setter and a leader.
J-Roll's struggles reflect the Phillies' issues at home. His batting average is 44 points higher on the road than it is in Philadelphia. The 2007 NL Most Valuable Player is not playing like his former self, but if he returns to form, the team will benefit greatly. Rollins scored at least one run in 102 games in 2007. If Rollins could get going on that MVP/139 runs scored pace, and the Phils continue to win at the same rate when he scores, they'd easily be looking at another division title.

John Mayberry Jr. hit a big homer in the rout of the Rays. The 3-run blast in the first inning put the Phils up by 6 and allowed them to sail the rest of the way.
Here's your MLB contribution comparison for Mayberry Jr. and the guy he was traded for in the offseason, Greg Golson...
Junior- 7-for-24 (.292 avg), 2 doubles, 3 HR, 7 RBI, 4 runs.
Golson- 0-for-1, 1 K.
Golson is in the Rangers organization and was called up for a cup of coffee in May, but was sent back down. With triple A Oklahoma City, Golson is hitting .277 with 1 homer, 25 RBI and 6 steals.
------------------------------------
The South Atlantic League All Star game was played Tuesday night in West Virginia, and friend of Phoul Ballz Justin De Fratus was the winning pitcher for the Northern Division all stars! After giving up the tying run on a homer in the top of the 9th inning, De Fratus got the win when the North team scored the walk-off victory following two singles and a throwing error by the South team.
More of your BlueClaws contributed to the win. Professional baseball's steals leader, Anthony Gose, stole two bags, had two hits and scored twice. Travis D'Arnaud, who played on the North team with his brother, West Virginia short stop Chase D'Arnaud, had a hit in one at bat. Tyler Cloyd pitched a scoreless inning and struck out 2. Second baseman Harold Garcia was hitless in 2 at bats. Reliever BJ Rosenberg did not pitch.
Lakewood manager Dusty Wathan was the manager for the victorious North Division team.