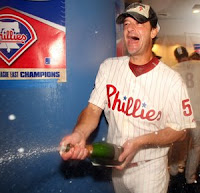 This week's edition of The Sporting News has a feature where Bill Eichenberger asks various Phillies pitchers about Jamie Moyer and any lessons he may have taught them. Here are some excerpts.


Joe Blanton on focus: "...He's taught me about the mental part of the game. He's spectacular at that, the best I've ever been around. He has a plan, but at the same time he is smart enough to adjust when he needs to adjust."

Mmm-hmm. Moyer adjusts. It's pretty evident by his 6.35 ERA that, once the runs start, Moyer is able to change his approach and shut the opposition down.


Ryan Madson on longevity: "I've watched after he pitches how he takes care of his arm and his body. Just from a maintenance standpoint, I know from watching him how important that is to keep me in the game."

Yeah, Mad dog...plus, you gotta keep that arm in shape for carrying those heavy purses of yours.


"Jay" Happ on composure: "Just his mound presence is a big thing. He has a lot of confidence and is able to hold his emotions in check."

I could keep my emotions over a poor outing in check too, if I knew I was making millions of dollars to be less than mediocre.


Cole Hamels on perspective: "Jamie has helped me out a lot by giving me a different way to look at certain outcomes. Take a game where you might throw a shutout. It might look good on paper, but there might have been a couple of things that you did wrong, and you have to pay attention to every little detail because sometimes you can better yourself that way."

Great! The declining veteran is telling the World Series MVP that pitching a shut out isn't good enough. Thanks, Moyer. That sure sounds like a big help coming from the guy who has one win since April 26th.


Chad Durbin on mechanics: "He'll see that mechanically something is just a little off; maybe you are trying too hard..." "You could call him a player-coach."

I'd rather call him retired.

Amanda said…
Hahah. I like the side comments. I actually wrote my SAT essay about how Moyer helps younger pitcher like Hamels. It was the best section I did on. Haha.

Moyer would make a great pitching coach, but right now he is really struggling. I think he just should of ended it on top, with the World Series. Hopefully that ERA will go down.
June 19, 2009 at 11:26 AM

GM-Carson said…
I love respect what Jamie Moyer has done for the Phillies, but that should be just that "has done". He should no longer be "doing", because he's extremely ineffective anymore.
June 19, 2009 at 12:13 PM