Sleep in Bed, Not on the Field 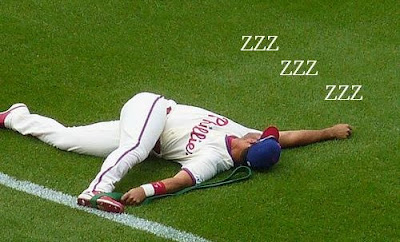 Pedro Feliz fell asleep on the bases last night...again. During a potential Phillies rally in the 6th inning, a mental lapse by Feliz prevented the Phillies from scoring on a fly out to centerfield by Eric Bruntlett. Feliz, was on first base, while Matt Stairs was on third base, forgot there was only one out, got too far off first and was doubled off, on a throw by BJ Upton, before Stairs could score on a sacrfice fly.

Did you notice the part earlier when I mentioned "again"? Yeah, well Feliz pulled this same pile of horse crap in the first game of a double header with the wild card leading Brewers last September. The Phillies won that game, and swept the series, so Feliz's mental slacking never made the impact it would have if it had killed a rally or cost the team a run, like last night. The game on September 14th was a similar enough situation, with Feliz on first base, in the midst of a rally. A routine fly out to Milwaukee right fielder Cory Hart turned into an embarrassing moment for Pedro, who forgot how many outs there were, and had rounded second base, while the outfield assist came in slowly to Prince Fielder at first base, for the double play.

My question is this...who is to blame? Is it 100% Pedro Feliz, or is it first base coach Davey Lopes' mistake also? The first time, perhaps, caught up in a rally, Lopes could forget to mention the number of outs to a runner. However, as a coach, once a player is proven to not be fully invested in a game on the base paths, the coach should absolutely make it a point to not allow that player to fall asleep and forget the outs ever again. Davey Lopes needs to know his runners, and needs to perform his duties as a coach. It is his job to tell the runner the outs, especially phlegmatic third basemen who get doubled off first base by outfielders on a regular basis.

I think its both Lopes and Feliz. I'd say mostly Feliz, because even if the first base coach tells you, you might not process it, ya know. And if Lopes was yelling to get back, many Pedro didn't hear him? But I think its a little of both.
June 26, 2009 at 6:59 PM

Jay Floyd said…
The mental slacking is the worst part of this huge slump. The non-play where Scutaro stole second on a walk...the dumb move with Jimmy on Burrell's late inning grounder...and then this garbage with Feliz.

I hate mental slacking in ball players. They are major leaguers. These things should not happen at that level.
June 27, 2009 at 1:04 PM