Happy June 8th To Everyone

By Jay Floyd June 08, 2009
MLB announced today that Raul Ibanez and Jimmy Rollins are the current leading all star vote getters at their positions.
The Rays are stealing a whole lot of bases this season. More than any other team. One of them by Pat the Bat.
Bobby Abreu collected his 2,000th career hit in a loss on Sunday.
Remember how much we all hated the Rockies, after they swept the Phillies in the 2007 playoffs? Well, this should make you feel better...Adam Eaton has agreed to torture them by signing a contract with their organization.
And just below, you will see former Phillie, Placido Polanco taking up break dancing between innings. 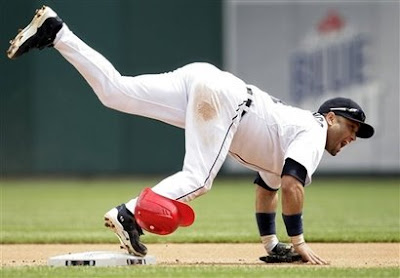