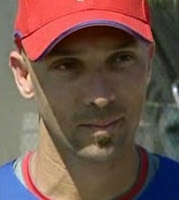 As names from the supposedly confidential 2003 MLB drug tests continue to leak out, players continue to test positive and get suspended, and even huge stars in major markets are made examples of, maybe all the hype last week over how bust-out players will be inevitably suspected of cheating was misdirected. MLB's drug policies are in place and are being properly enforced. While fans, writers and people in between mostly seem to feel like the sport became tainted in the steroid era and, as a result, become suspicious of players who excel, perhaps it's time to trust. Trust the players who have not been exposed as cheaters...and trust the sport, that you love, to prevent cheaters from wrecking the game.


Instead of speculating about the guys on top of their games these days, while Major League Baseball is enforcing their anti-drug policies, perhaps we should be taking a look at guys who have fallen off since MLB has been testing strictly in recent years.


How about former American League homerun champ David Ortiz? In his first 5 seasons playing for Boston, Ortiz hit 208 total homeruns and batted over .300 three times. This season Ortiz is batting .210 with just 5 homeruns.


And what about Indians masher Travis Hafner? The man they call "Pronk" topped 100 RBI four straight seasons, and hit a combined 127 homers during those years. In the two seasons since then, he's hit a combined 11 homeruns, while suffering with injuries.


I ain't hatin'...I'm just statin'. Look, there are no fingers being pointed here. I'm simply saying that if someone is going to point fingers, it might make more sense to point at guys that have fallen off in the testing-for-sterioids era.

mvr joe said…
Awesome post. I definitely think this is where the focus of fans ire needs to be placed. Well that and the dumbasses still testing positive, ahem.....ahem...think i caught a cold from one of them...ahem ahem
June 17, 2009 at 12:36 PM