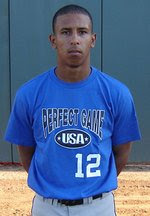 A prospect who has been talked about a whole lot lately is outfielder Anthony Gose. Gose, a 2nd round pick of the Phillies in the 2008 amateur draft played just 11 games for the Gulf Coast League Phillies last year, before getting hurt. Gose, an 18 year older, stole his minor league leading 36th base on Tuesday night, is batting .253 with 21 RBI and 29 runs scored, in 49 games with the Lakewood BlueClaws. Gose took some time to answer some questions for PhoulBallz.com, and here's how that went down...


-I've spoken with the coaching staff and they're impressed with you this year. Tim Gradoville even compared your baserunning to Shane Victorino. Can I get your response to the coaches' positive view of your game and speed?

I think it's great. I don't watch too many Phillie games. I'm from LA, I'm a big Dodger fan. So, I've never seen too much of how Victorino steals bases. I know they call him the Flyin' Hawaiian. I know he's fast.


-Travis D'Arnaud also grew up a Dodger fan. Do you guys bond with that?

Yeah. I live probably 5 minutes from D'Arnaud, so everybody in that area is a big Dodger fan. I believe Zach Collier is (also a Dodger fan).


-Can I get you to talk about the coaching staff...manager Dusty Wathan and hitting coach Greg Legg?

They're real good guys...real good guys. Not real loud and vocal. They keep it mellow. If they have something to say, they approach you like an adult. So that's real nice to be able to play for guys like that. Great coaches, so- always having a good time.


-What's the best thing about New Jersey so far for you?

Living my own, I guess.


-What are your main goals for this season?

Goals for this season? Lead the minor leagues in stolen bases....definitely the league. And just score a lot of runs.

I've never seen Jackie Robinson play, but I always liked him. Rickey Henderson. And my favorite player for the longest time has been Juan Pierre.


- What do you think you've improved already this season and what are you still working on improving?

Stealing bases has been a big plus for me this year. I didn't do that much last year, except- I did a lot in high school. But, that's been a real positive. Scoring a lot of runs. And probably just work on keeping the strike outs down, putting the ball in play and giving myself a chance to get on base.

My favorite movie is Remember the Titans. Another one I love is Rush Hour 3. I watch that all the time.

great job with these interviews!!

They are really a good bunch of kids, and as talented as any we have ever had in Lakewood....They don't have the added advantage of the 2006 championship team...that squad had 3 players who had experience at higher levels (Spdale, Urick, Aprilla)...that makes this team more special in my eyes.

nice job with these interviews...aren't they a good bunch of kids......to me , they are more impressive than the 2006 championship team, because that team had 3 players (Spidale, Urick, Asprilla) who had experience at higher levels..that makes this team even more exciting to me!!

It's surely going to be a fun summer watching this group of BlueClaws.