By Jay Floyd June 02, 2009
Joe Blanton, Brad Lidge and Jamie Moyer have all put together some solid performances as of late. All three had awful stretches recently, but now seem to be back to World Championship form.

Just a couple weeks ago, Brad Lidge had given up runs in a career high 6 straight appearances. And as recently as two weekends ago, Lidge blew two saves in New York against the Yankees. In Lidge's last 5 appearances, he's allowed just 1 baserunner, and he's saved each game, including the last four on consecutive days.

Jamie Moyer, who just won the 250th game of his career on Sunday, has put together three straight outings where he's pitched 6 full innings and gave the Phillies a real shot to win each game. In his last three games, Moyer's ERA is 4.00 in 18 innings pitched. In the three starts that preceded those games, Moyer's ERA was 13.86 in 12 1/3 innings. 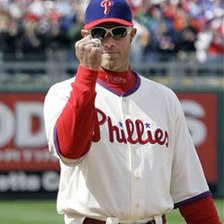 Jayson Werth must like to travel or performs better with a stomach full of room service. Werth's home/road splits stand out far more than any other Phillie.

Stat to ponder- The Phillies are 19-4 (.826 winning percentage) in games when Jayson Werth scores at least 1 run.