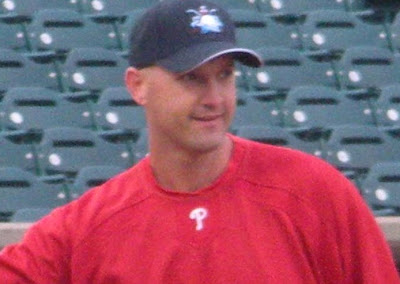 
Dusty, South Atlantic League All Stars were announced this week, and you'll be the manager of your division's team. Can I get some comments from you on how excited you are to be managing the team and maybe what it took to make some of the roster selections (Lakewood has 6 players on the team)?

Well, for me personally to be picked by the other managers, coaches and front office people is a nice honor to have. It's all about the players though, and being in first place and them winning games. So, it's because of them that I'm going. We got six in and it's well deserved by all of them.


Was there anyone who got snubbed from the team that you were reluctant about?

Well, I mean there's always somebody. You only have so many spots whether it's the big leagues or A ball. There's always somebody that's gonna get missed or overlooked. And I think (Jim) Murphy was a little bit overlooked, but the first base position is always a tough spot. The two guys who are going are well deserved and you always wish that you could have one more guy be able to go.


Is there anything you've seen with the team that needs improvement for the rest of the season going forward?

I just think we need to continue executing offensively. When we do execute, we win ballgames. When we don't, we have a tendency to lose. And we don't have a lot of power, we have to execute fundamental baseball...move runners over, hit and run, and get the signs and pitch well. And we've done that for the most part all year and there's been a few games here and there where we haven't, but that's A ball, but they're getting better every day and that's nice to see.


What's the conversation like with a player that is going to see his playing time decreased or when his role on the team is going to change dramatically?

I don't think there's much of a conversation. If you hit, you play. That's basically baseball.


So, the lineup will speak for itself?

Yeah, if you're doing well, some how, some way, you're going to find yourself in the lineup. Whether you're the top prospect here, or the guy that's the 25th man. I mean for the most part, obviously certain guys have to play, and that's the way the minor leagues (are). Then you have those guys in the middle who have had their chance to play and when it's their time, hopefully they can take advantage of it. But, ya know, you have somebody else coming, pushing you all the time and you don't see many .300 hitters sitting on the bench at any level.


What's the vibe like with the team away from home on the road?

They have a good time. Most of them have been to college and know what it's like to go on road trips. It's not much different. They all get along, and you're gonna have guys get into spats or arguments, when you put 25 guys together, just like when you have two brothers fighting, you're gonna have disagreements in the club house. But for the most part they haven't. They get along real well and joke around a lot with each other, so that's always nice to see.


I wanted to ask you about your dad (former ML player and manager, John Wathan) and how being able to grow up around him has been advantageous to your career...

Yeah, for sure. I mean, being around the ballpark growing up has helped me a lot. I think I paid attention, asked a lot of questions when I was younger. And to have someone to bounce questions off of growing up and even now is a huge advantage. Any time you go into the same profession as your father, whether it be a plumber or a baseball player...to have a mentor and somebody there to bounce questions off of, I think you can have an advantage over everybody else a little bit.