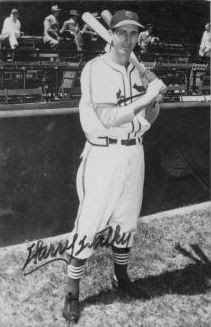 Harry "The Hat" Walker played with the Phillies for less than two full seasons, but made the all star team and won a batting title as a Phillie. Walker came to Philadelphia just a month into the 1947 season in a trade for Ron Northey, after having played parts of 5 seasons with the Cardinals and driving in the winning run in game 7 of the 1946 World Series.

Walker arrived with a chance to play every day as the Phillies' centerfielder. His batting average took off and he finished the season with a .363 mark to win the NL batting crown. Harry winning the batting title marked the only time brothers had both done so. Harry's brother Fred "Dixie" Walker hit .357 for the Dodgers in 1944 to win his own NL battinh title.

The nickname "The Hat" came about as a result of Harry's constant fidgeting with his ball cap both prior to batting and on the mound between pitches. The press reported that Walker went through dozens of caps in a single season.

In 1948, Walker had a tough time finding his batting champ stroke and his average dipped to .292. He was traded to the Cubs after the season. Walker played just one more season as a regular prior to returning to St. Louis as a backup for two more seasons.

In 1951, Harry began managing in the Cardinals' minor league system and later managed St. Louis for one season. He also later managed both the Astros and Pirates.