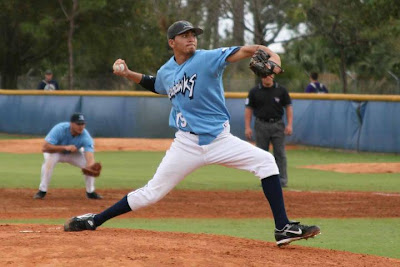 Lakewood starting pitcher Jon Velasquez was signed by the Phillies in late winter as an undrafted amateur free agent. The 23-year-old Bronx native began the season in the bullpen, but was quickly inserted into the BlueClaws' starting rotation after a solid start to the season, and 3 wins in relief. When asked, pitching coach Bob Milacki does not hesitate to point out Velsquez as a pitcher on the Lakewood roster that could excel at higher levels. Jon Velasquez took time out after his last start, to answer some questions for PhoulBallz.com. Here's how that went...


-Jon, do you do any different kind of prep work between outings after you've had a poor performance or an outing with bad luck, versus when you're more sharp in a game?

Basically, my last outing, I didn't feel was too bad, but I just didn't feel like I mixed my pitches enough. It was just a lot of fastballs, and ya know, not enough working in my other good pitch, which is my change up...like (I did) today. I love the way Travis (D'Arnaud) called the game today- a lot of change ups, mixing in my fastball- pretty much all through the 4th inning. I didn't throw a curve ball or slider until the 5th inning and I think that just helped me a lot, just working off my fastball and going to my change up. That's basically my only difference, when I fall in love with the fastball, instead of throwing my other great pitch, which a lot of the coaches here tell me is my change up. That's when I get in trouble.


-How much of a help is Travis D'arnaud, your catcher?

Travis D'Arnaud's been really good. He's helped me get 6 wins. I just love him as a catcher, and we've been getting to know each other better. He knows what I like to throw, he knows what rhythm I get in. And me and him have seemed to just click together, to know what I'm going to throw, pitch to pitch.


-Can I get you to talk about the process of getting signed out of the try out camp and being an undrafted free agent?

Aw, man. The try out was a long, long time coming. Just very happy- a great day in my life. After college, just not getting drafted and being disappointed and doing all the try outs before that over the summer and just getting turned away by all these other teams, and praying every night and talking to family and just asking for just one opportunity, just one chance to just get in (with a pro organization). And sure enough, (Phillies scout) Mal Fichman, I give him a lot of thanks, just gave me that one opportunity and chance to go to spring training, to basically fight for a position on a team, and, actually, work hard and I got a chance to play here for Lakewood and I'm very happy to be here.


-Who was the biggest help to keep your head up during the down time between June, when you weren't drafted, and February, when you were signed?

My whole family. The whole family was there for me, especially my aunt, and my cousin and my uncle, who I was staying with over there in Tampa. And I was very thankful for them to let me stay in their house for the time being, 'cause they knew my situation, they knew I wanted to try out and stuff like that. And, especially my aunt and my cousin, he just kept pushing me and telling me, "You gotta. You gotta. Just don't give up." And it came to a point where I was just like, "Ya know what? I don't feel like doing the anymore." I was just gonna quit and get a regular job, a regular life. Ya know- something I didn't want to do. I really thank them a lot, for being very supportive, Just pushing me to do better.


-What do you think of New Jersey so far?

It's very close to home. A little different from New York, but Jersey's not too bad.


-Do you have family coming out to see you regularly?

I have my mom come out and a few of her co-workers, I had my uncle come out one time, my girlfriend came out. My other family members (from Florida) said they're going to try and come in Georgia, when we go there.


-What was your favorite team growing up (need I ask?- he's a Bronx native)?

Yankees. From Bronx, New York...I was born and raised on the Yankees.


-Was there any conflict with the Phils/Yanks interleague match up last weekend?

(Laughs) No. I was just very excited to see the game, ya know. Because that's one thing I've been wanting to do my whole life- is pitch at Yankee Stadium. And I got the opportunity to play here, and just to see the Phillies actually playing in Yankee Stadium, I was like, "Wow, I wish I could just be there right now, and just pitch to one batter, one inning, or something like that, in Yankee Stadium." That whole stadium itself, just how big the Yankees are, and me being a Yankee fan growing up, just knowing it's Yankee Stadium...I just want to pitch there one time.


-Of course, you'd like to pitch in Citizen Bank Park too, right?


-Are there any ML pitchers you've watched that you think you might model any of your pitches or game after?

I have a lot of them. Cartoons, I like the Simpson, Family Guy. Usually, I just watch SportsCenter and MLB Network's big.


-I coach Babe Ruth League, 13-15 year olders. Is there any advice you might give to someone in that age range that might hope to play beyond high school?

Just work hard. Just a lot of hard work, and when you think times (are) going down for you, just work through it because you never know. Never give up. Patience and determination is basically what's going to get you where you want to be. So, just work hard.

Jay Floyd said…
More Hardball wants to know who has the best outfield in MLB...