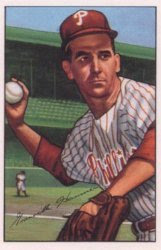 Granville "Granny" Hamner was an all star short stop who played for the Phillies from 1944-1959. Granny was signed by the Phillies when he was 17 years old to play second base. His strong arm and solid range later got him moved to short stop. The following season, Granny's brother Garvin signed with the Phillies, and they began the 1945 season as the team's double play combination.

Early on, Granny did not prove a match for Major League pitching. He hit just .171 in 14 games as an 18 year old before he was sent down to the minors to gain more experience. By age 21, in 1948, Granny was back with the big league club to stay. That season, brother Garvin batted .198 in 32 games and was sent down. He never returned to the majors again.

Granny suffered a knee injury in 1958 and missed much of the season.. The following year, he was traded to Cleveland and was released by the Indians after the season. He attempted a comeback, as a pitcher, in 1962 with the Athletics, but gave up 6 walks and 10 hits over four innings of work and called it a career.