Trevor May Steps Back to Move Forward 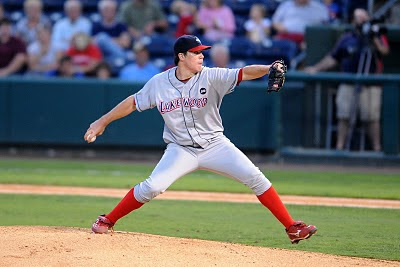 Baseball America ranked Trevor May as the #5 prospect in the Phillies' system last off-season. As the 2010 season progressed, May struggled to live up to the expectations that accompanied such recognition.
May, a 20-year-old starting pitcher who helped guide Lakewood to a South Atlantic League championship in 2009, began this season in Clearwater, one level above Lakewood. As a member of the Threshers' starting rotation, May posted a 5-5 record with a 5.01 ERA in 16 games. The record and the ERA weren't what drew the most concern though. May, who walked just 43 batters in 77 1/3 innings pitched last year, had trouble locating pitches and began giving out too many free passes to opposing batters. As a Thresher in 2010, May walked 61 batters in 70 innings.

Phillies officials saw the key issues with May, a 4th round draft pick in 2008, were physical and mental maturity. He was demoted early last week and sent back to Lakewood to focus on locating his pitches and building his confidence. BlueClaws manager Mark Parent expressed faith in May's ability to bounce back and continue his development. "Sometimes a change of scenery can do a guy good." Parent said. "He certainly has stuff to go up the ladder (toward the Majors), it's just a matter of confidence."

The news of the move was a disappointment to May, who felt like he was on a fast track toward the Majors during his first stint with Lakewood. "You don't ever want to get sent down. That's not the goal. The goal is to go up and get closer to the bigs," May stated. The 6'5" righty hurler realizes that it's up to him to make that happen. "There are certain things that I need to work on, that the guys higher up weren't seeing much improvement (with). So I came here with the mindset of 'it's time to work' and I'll use this as incentive to get back and improve."

With a focus on keeping his pitches down and inducing more ground balls, May's belief in himself already seems to be on the mend. "I feel like since I've been here- huge strides!," May expressed excitedly. It shouldn't be long before May gets back on the track that got him recognized as a top prospect with the Phillies.
_______________________________
Reminder- Today is PhoulBallz Phillies Wednesday. Tune in to The Shore Sports Report around 3:20pm to hear me talking baseball with Mike & Joe. Listen on the air in New Jersey on 1160 WOBM AM and 1310 WADB AM...or listen live online by clicking this link. The Shore Sports Report is on each weekday at 3pm!