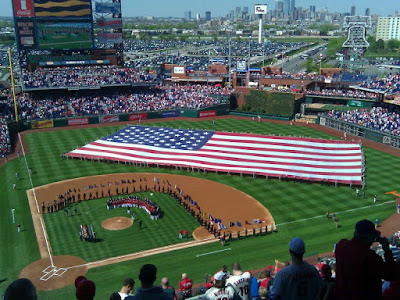 With the Phillies on the road last weekend, I began to wonder why there isn't a scheduling rule in place for the team from Philadelphia to be home each year on Independence Day. It's the holiday that celebrates the birth of our nation, so why wouldn't Major League Baseball wish to allow the city where our forefathers initiated the start of the World's greatest country to host its national pastime, in celebratory fashion, on the most important federal holiday- America's birthday?

Each year in Massachusetts, Red Sox baseball action is scheduled in accordance with a regional holiday. For decades, the Red Sox have played at home on Patriots Day, the day to honor the events that led to the American Revolution, on an annual basis. In addition, the Boston Marathon is slated for Patriots Day each year. Also, every preseason the Phillies are given 2 final spring training games in Philadelphia, known as the On-deck Series. So obviously, the MLB schedule can be made to accommodate special holidays and events.

As important of a holiday that Independence Day is to our nation, shouldn't it be a bigger deal to the city that started it all? Couldn't the national pastime of this country become a means with which to honor the the birthplace of the United States, as Boston does with Patriots Day?

Come on, Phillies....come on, MLB...let's make Philadelphia, the city that is home to all the official landmarks that symbolize how this country was built, an annual proprietor on America's birthday! It'll make ya feel good.

mark evans said…
Couldn't agree more, the team should be home in the cradle of Liberty on the 4th.

Home cookin tasted good last night. Let's see if Cole show's up to the table with a healthy appetite this evening...
July 6, 2010 at 2:38 PM