Worley Called Up to the Big Club 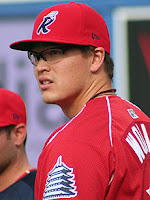 Vance Worley, who has been scorching hot lately with the Double A Reading Phillies, was recalled by big league Phillies today. The Phillies, who began shuffling their pitching staff almost immediately after Kyle Kendrick's poor outing against the Cardinals in St. Louis on Monday, have made more moves. Kendrick was replaced by Drew Carpenter on Tuesday. Now, Carpenter, who entered Tuesday's game in relief of injured starter Jamie Moyer, has been replaced by Worley.

Speaking after his latest start, a victory against Trenton where he threw 8 innings, allowed 0 runs, let up 1 walk and struck out 3, Worley, a right-hander, said that he would expect his name to pop up in trade rumors as the non-waiver deadline approached. A 20-pitch 8th inning led to substitute pitching coach Gorman Heimueller pulling Worley from the outing, preventing him from attempting to throw consecutive complete game shutouts. Worley realized, however, that there is a bigger picture and had a goal. "It was just important to get this deep (in the game), show that I can do it, and then...when the time comes, the big leagues is more important...," Vance told The Shore Sports Network's PhoulBallz.com in an exclusive interview on Sunday. Now, three days later, he's there.

I'll be on The Shore Sports Report today around 5:20pm talking Phillies baseball with Joe & Mike. Listen live, in NJ, on the air- 1160 WOBM or Shore Sports 1310 AM...or listen live on the internet by using this link.