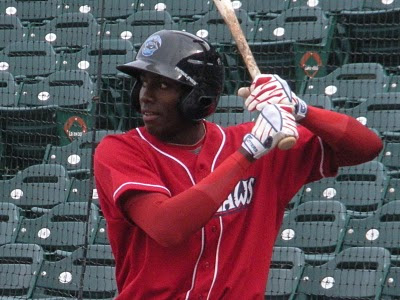 Thursday night, Jiwan James hit safely for the 22nd straight game, which set a team record for the Phillies A-Level affiliate Lakewood BlueClaws. No doubt, James' conversion from pitcher to every day player has been successful. The milestone was locked in the first inning, when the switch hitting James led off the game against the Kannapolis Intimidators with a single to center field.
James, a 22nd round draft selection by the Phillies in 2007, was ranked as the 11th best prospect in the Phils' system by Baseball America last off-season. James pitched in 9 games with the Phils' Gulf Coast League team in 2007 and reemerged as an outfielder with the short season Williamsport club in 2009, where he batted .264 in 30 games.
According to James, his recent success can be attributed to some adjustments in his approach. "The difference between the first half and now is I shortened up my swing a little bit," James told PhoulBallz.com in an exclusive interview. "I feel like in the first half, I was trying to hit the ball a lot harder than I should have been, instead of letting it come naturally. I've also been laying off (more) pitches and being more patient at the plate."
James' average in June and July (.315) has improved greatly over his efforts from April and May (.230 avg). Since James' turnaround, Lakewood's winning percentage has shot up also (.707 in June & July/.558 in April & May). As James comes into his own, he has begun to be recognized as a catalyst in the defending South Atlantic League champions' lineup. Of his role as leader of the Lakewood offense, James said, "If the lead-off hitter is doing good, then your winning percentage is going to go up. That's baseball period."
Mitch Hilligoss is the owner of the South Atlantic League hitting streak record at 38 games, set in 2007. Phillies minor league second baseman Harold Garcia recently set the Florida State League hit streak record at 37 games, while playing for the Clearwater Threshers. Asked when his hitting streak might become a big deal, James said, "I'm trying not to think about it. I watched Garcia do what he did down in Clearwater. I watched that every day, and now it's my turn."
__________________________________