Votto is Super (Thanks For Asking) & Has a Message For Cholly

By Jay Floyd July 09, 2010
Charlie Manuel is off the hook. The Phillies manager was subject to loads of ridicule after Cincinnati Reds first baseman Joey Votto was initially left off of the National League all-star team. Manuel, as the manager of the NL team that made it to the World Series last year, will manage this year's NL all-star team and has some say in which players make the roster. Manuel had been critiqued heavily for selecting his own first baseman, Phillie Ryan Howard, and Atlanta utility man Omar Infante over Votto to the team.

Thanks to online fan voting to fill the final spot on the all-star rosters, Votto made the team and prevented what could have been the most stunning all-star snub in recent memory. Votto leads the National League in homeruns and OPS (on base percentage + slugging percentage). Additionally, he ranks among the top 5 in the league in RBI and batting avg.

Upon learning of the news, Votto stated that he was relieved the final vote was over. Votto also told reporters, "I’m excited and I really, really appreciate the fans and their support.” Votto was then photographed receiving some celebratory smooches from teammate Brandon Phillips and telling Charlie Manuel that he better recognize... 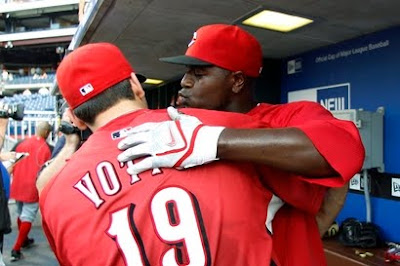 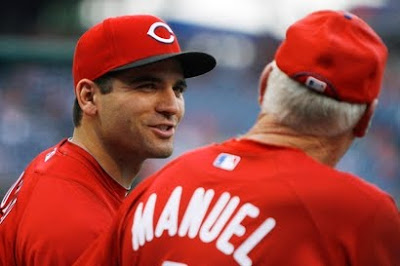