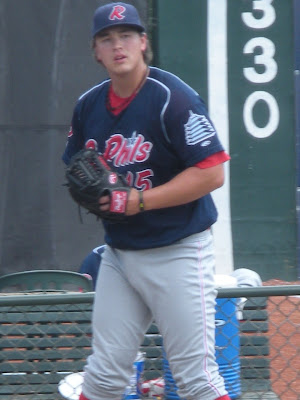 It took 99 pitches for Vance Worley to put 8 consecutive zeroes on the Waterfront Park scoreboard next to the Thunder's team name. In the fourth and final game of the series in Trenton, Worley pitched 8 excellent innings, while allowing just 3 hits, 1 walk and striking out 3 batters, in his first start since his appearance in last week's Eastern League All-star Game.

Reading's offense jumped on Trenton starting pitcher DJ Mitchell early. Rich Thompson and Harold Garcia laced singles to start the game, in the top of the 1st inning. Following a Mike Spidale sacrifice bunt, lefty masher Matt Rizzotti drove a deep fly ball to center field that hit off the wall and was initially called a double. The umpiring crew then conferred, as Waterfront Park's advertising collage of an outfield wall presents a difficult task to determine calls at times. Following a brief meeting, the umpires corrected the call, and ruled Rizzotti's drive a 3-run homerun.

Mitchell settled in, following his 4-hit first inning, scattering 3 hits allowed over the next 6 innings, to keep the Thunder within striking distance. However, Worley would not budge.

It was the 8th inning before a Trenton baserunner reached 2nd base. The 20-pitch frame by Worley was his toughest of the day. After retiring the first two batters in the 8th, he gave up a single to Thunder right fielder Edwar Gonzalez. Second baseman Justin Snyder then worked a walk on a borderline call that seemed to irk Worley. Catcher Tuffy Gosewich then called a time out to settle his pitcher down and Worley's focus quickly returned, as he got Saturday's Thunder hero Justin Christian to fly out to center field.

Worley's pitch count of 99 following the 8th inning led substitute pitching coach Gorman Heimueller, filling in for the vacationing Bob Milacki, to pull the plug on Worley's outing. "I told Gorman that I wanted to finish it," Worley said after the game. "(In the 8th) I gave up a base hit and then I walked a guy, and unfortunately that made my pitch count just high enough to where he didn't want to send me back out."

Right-handed reliever Jason Anderson took over to close out the game, pitching a 1-2-3 scoreless 9th inning.

Worley feels as though his success is carrying over from start to start. The 22-year-old right-hander is 5-2 with a 2.32 ERA through his last 10 games, including 17 scoreless innings over his last 2 outings. Worley credits his focus on basic fundamentals as well as improved mechanics for his string of impressive performances. "It's all about getting that first pitch over for a strike and getting guys behind in the count and throwing what I want, when I want to," Worley said while speaking exclusively with PhoulBallz.com after Sunday's contest. "What has helped also is being able to pitch without throwing across my body, driving my hips toward the plate and being able to locate better without forcing it there."
Trenton manager Tony Franklin was impressed by Worley's efforts. "We've seen Worley before. I always thought he had pretty decent stuff...(but) that was the best I've seen him," Franklin said following the game. "He pitched fantastic. We didn't do much. He didn't give us much."
Worley was named Eastern League pitcher of the week after his previous start when he threw a complete game shut out against Harrisburg. Worley helped his own cause in that game by slugging a homerun as well.
Reading's road trip will continue Monday in Erie, where Yohan Flande will take on Duane Below.