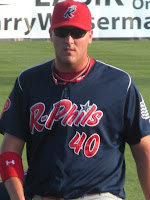 Matt Rizzotti is a 24-year-old prospect for the Phillies. Rizzotti was taken by Philadelphia in the 6th round of the 2007 amateur draft. In 2009 he spent the season platooning at first base for the High A Level Clearwater Threshers but has since earned his own starting spot with Reading.

Rizzotti's shine has grown brighter as this season has gone on. Currently playing with the Double-A level Reading Phillies, Matt is batting .355 with 15 homers and 56 RBI in 62 games with the R-Phils this season. In May he was named Phillies minor league player of the month. In June, he was named to the Eastern League eastern division All-star team. Rizzotti is steadily increasing his career season-highs in homeruns (16), RBI (66) and hits (117).

Rizzotti's 2010 statistics, topped off with a 1.015 OPS in 93 games at 2 levels this season, could begin to draw interest from trade suitors with the Phillies, as the non-waiver trading deadline draws closer. In the meantime, check out this exclusive interview with Matt in the media player below, as we talk about his increased output, Stephen Strasburg and plenty more.


Reminder- Today is PhoulBallz Phillies Wednesday on The Shore Sports Report. Tune in, on the air, around 5:20pm to Shore Sports 1310 AM and WOBM 1160 AM...or listen live online by clicking this link, as I join Mike & Joe to talk baseball!