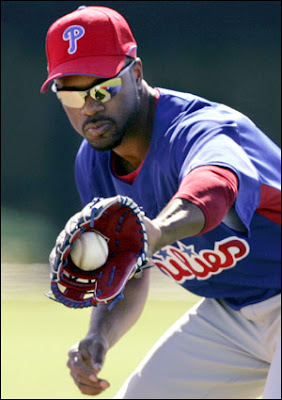 The man who has become synonymous with spark, as it pertains to the Phillies offense, throughout his career has been anything but that since returning from the the calf injury that sidelined him twice this season. Since his return from a calf strain, Jimmy Rollins is 18-for-97 (.186 avg.) in 24 games. Prior to landing on the disabled list, Rollins was 14-for-41 (.341 avg.) through 12 games.
Rollins has gone hitless in 50% (12 of 24) of his games played since his return. Last season, Rollins went hitless in just 27% (42 of 155) of his games played.
Phillies manager Charlie Manuel has taken notice of the struggles of the one-time National League Most Valuable Player. Manuel has moved Rollins around the batting order in an attempt to get him back on track. Rollins, generally the Phils' lead-off man, has batted 3rd, 5th and 6th since his reentry to the Phillies lineup. None of those adjustments have proved successful yet, as Rollins has posted a combined .194 batting average (7-for-36) in places other than 1st in Philadelphia's batting order.
Despite his difficult stretch, Rollins has still produced in key spots for the Phillies. His overall batting average with runners in scoring position this season is .360, which is better than teammates Ryan Howard (.280), Placido Polanco (.296), Raul Ibanez (.278), Shane Victorino (.324), Jayson Werth (.163), Carlos Ruiz (.239) and Chase Utley (.300)...making Rollins the team leader in Batting average w/ RISP among everyday players. Whats more...Rollins' average with runners in scoring position and 2 outs is .500, which also leads the team.
So, while Rollins is rusty and has yet to hit his post-injury breakout stride, he still possesses some clutch stats to prop himself up until he prevails as the perennial catalyst for the lineup that currently leads its division in runs scored, homeruns, total bases and extra base hits.
____________________________________