DeRenne Fills in for Villar, Seals a 'Claws Win 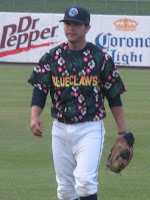 Following a day loaded with trade rumors, the Lakewood BlueClaws had to battle back from a deficit. They did so with the help of the man who filled in for the individual who was ultimately the expendable piece in the parent club's latest trade.

Overnight, names like Jonathan Singleton and Brody Colvin were mentioned most frequently among BlueClaws players who would be included with last season's Rookie of the Year runner up and current Phillies starting pitcher "Jay" Happ. By the time the fuzzy speculation became clear facts, neither of those prospects were involved. It was last season's speedy BlueClaws center fielder and current South Atlantic League All-star shortstop Jonathan Villar who would be part of the package sent to the Astros. A brief rain storm forced the cancellation of batting pracitce and allowed the players some extra time to relax and cope with losing a teammate. It also allowed versatile infielder Keoni DeRenne some time to prepare to start in place of Villar, who was originally in the Lakewood lineup.

The game began as a pitchers' duel. BlueClaws starter Colby Shreve held the visiting West Virginia Power without a hit through the first 3 innings, while his counterpart, Phillip Irwin, sparkled by striking out 9 and allowing just 2 hits over his first 5 innings. A 4th inning miscue, on a play that should have been a routine 1-3 play, began a Power rally when first baseman Jon Singleton briefly bobbled a grounder by Jarek Cunningham and then Shreve missed stepping on the base, once he received the ball from Singleton. It was scored a base hit for Cunningham. Three RBI hits would follow that inning, giving the Power a 3-0 lead. Shreve was not allowed much time to rest after the difficult frame, as Irwin fanned the side in order in Lakewood's half of the 4th.

West Virginia scored another pair of runs in the 5th inning. Leadoff man Evan Chambers walked and Cunningham followed. The 20-year-old second baseman slammed a hanging pitch from Shreve to deep left field onto the paved walk way, above the FirstEnergy Park berm, putting the Pittsburgh Pirates' affiliate up by 5.

Recent free agent acquisition Joe Esposito came on in relief of Shreve and served up a bases loaded walk in the 6th inning. Esposito, a 25-year-old righty, plated designated hitter Jose Hernandez with a free pass to Chambers, but escaped the inning without further damage.

Down 6-0, the first place BlueClaws began to battle back in their half of the 6th inning. Alan Schoenberger made the first and third out in an inning where Lakewood ousted the troublesome Irwin, sent 10 batters to the plate and scored 5 runs. With 1 down, the rally began as center fielder Jiwan James reached on an error. A walk to Keoni DeRenne got Irwin the hook, as the right-handed hurler likely reached a pitch limit. Leandro Castro greeted reliever Marc Baka with a double that scored James. Jonathan Singleton then plated DeRenne and Castro on a 2-RBI single that Singleton was thrown out on, trying to stretch the hit to a double. Sebastian Valle then smashed a triple to deep center and scored on a wild pitch before right fielder Michael Dabbs drove a homerun to right field, allowing the BlueClaws to pull within a run.

The score remained the same until the home half of the 9th inning. Alan Schoenberger led off the inning with a single. Jiwan James again reached on an error when third baseman Elevys Gonzalez botched a throw to second when James bunted. The throw sailed into center field, allowing Schoenberger to move up to third base. A substituting Keoni DeRenne then stepped to the plate and crushed a double down the left field line. Schoenberger scored easily and a speedy Jiwan James came all the way around to score Lakewood's 7th run, locking down the 'Claws' 12th walk-off win in 50 home games this season.

DeRenne, spoke of his team's never-say-die attitude after the game. "There's a lot of fight in these guys. Never say never. From the first at bat, till the last at bat- these guys are giving their all," the Hawaii native DeRenne said after the game. "It starts with the coaching. They instill winning minds and winning attitudes and it carries out onto the field."

Manager Mark Parent also expressed his thoughts on the steady stream of comeback wins his squad has produced this season. "We have a lot of heart. We have a lot of athletic people that are energetic and like to win," Parent stated. "These player have won in college, they've won in high school, or where ever they were, and they like it. And once you get that feeling, it's something that you almost ache for every night and when you get beat, it hurts. These guys just play hard and don't give up and it's worked out well for us."