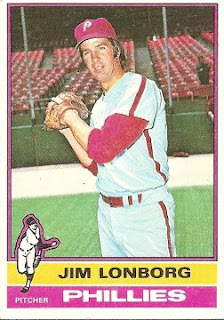 Jim Lonborg was a pitcher with the Phillies from 1973-1979. Lonborg began his career with the Boston Red Sox in 1965 at age 23. Initially, the righty hurler struggled, posting a 9-17 record in his rookie campaign, but by year three Longborg was an elite pitcher. He went 22-9 with a 3.16 ERA in 39 starts in 1967 on his way to winning the Cy Young Award.

Unfortunately for Longborg, a skiing accident the following off-season resulted in ligament damage that would trouble him going forward, as he won just 17 games over the next 3 seasons. In 1971, Lonborg got back on the winning track when he went 10-7 in 27 games for the Red Sox, but the team traded him to the Brewers in a 10-player deal following the season.

In 1972 with Milwaukee, Longborg got things back on track when he won 14 games, posted a 2.83 ERA and completed 11 games. After that season, the Brewers sent Lonborg to the Phillies with Ken Brett, Ken Sanders and Earl Stephenson for John Vukovich, Don Money and Bill Champion.

Longborg didn't quite shine as a Phillie until his second season with the club. In 1974, Lonborg won 17 games with Philadelphia and completed 16 games, 3 of which were shutouts. He also hit a grand slam against the Expos in one June outing.

The 1975 season looked to be going even better for a reformed Lonborg, when he began the season losing just once in his first 9 starts, including a pair of 3-hit shutouts versus Montreal. After throwing a 2-hitter against the Dodgers in June, Lonborg ran into injury troubles. He pulled a back muscle that month and won just two more games the rest of the season.

Lonborg would rebound once again in 1976, when he won 18 games for the Phillies and led the team's starters in ERA at 3.08. That season was the start of 3 straight division wins by the Phillies. Lonborg pitched the division clincher against, who else...but, Montreal, throwing a complete game. In the playoffs that year, Lonborg threw 5 hitless innings in game 2 against the Reds, but ended up taking the loss when Cincinnati rallied in the 6th inning to erase the Phillies' lead.

The up and down career of Jim Lonborg went back down in 1977 when he began the season on the disabled list with a shoulder injury. When healthy, Lonborg did extremely well for the Phillies. In July and August that season, he went 8-1, including a 2-hitter against the Dodgers. The Dodgers returned the favor however, pounding Lonborg for 5 earned runs in 4 innings and sticking him with a loss in the National League Championship Series that year.

1978 brought on more injury troubles for Longborg as he suffered from arm issues and won just 8 games. Longborg tried to bounce back in 1979, but was released by the Phillies after posted an ERA over 11 in 4 appearances. Longborg then retired from playing.

He was inducted into the Red Sox Hall of Fame in 2002. And in the Boston based television program Cheers, the image used of Ted Danson's character Sam Malone pitching is actually an image of Jim Lonborg.