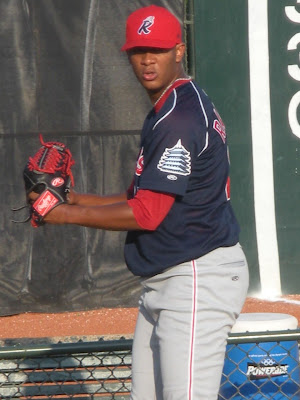 After the game on Thursday, JC Ramirez stood in the hall way outside the visitors' clubhouse at Waterfront Park, talking to the media in his red toe socks. The only thing cooler than Ramirez's choice of footwear was the manner in which he sailed through the Trenton lineup. Ramirez threw a complete game while striking out 9 Thunder batters, walking none and surrendering just 2 earned runs to earn a loss for the Reading Phillies.

Reading got on the board early. In the first inning, Mike Spidale reached on an error by Thunder shortstop Justin Snyder, then promptly stole second base. First baseman Matt Rizzotti then drove home Spidale when he smashed a double to left-center.

The 21-year-old Ramirez, came out dealing. In each of the first two innings, JC gave up a lead-off single, but each Thunder runner was swiftly erased when the next Thunder batters, each inning, hit into a 4-6-3 double play. In the third inning, Trenton first baseman Marcos Vechionacci led off with a single. Designated hitter Edwar Gonzalez popped out to Rizzotti, then Snyder stepped up and laced an easy grounder to Reading shortstop Freddy Galvis that seemed to eat him up, taking a bad hop, but was scored a hit. It was a ball that should have bailed Ramirez, and the Phillies, out of another inning. Instead, the inning continued, and center fielder Justin Christian drove a ball toward his Reading counterpart, Spidale, that scooted off of Spidale's mitt and allowed Christian to reach second with an RBI double. With runners on 2nd and 3rd, Matt Cusick slapped a grounder to first that hit off Rizzotti's glove, allowing two runners to score. Reading defenders settled down and escaped the inning without further damage.

The 3 runs in the 3rd inning were all Trenton needed, as a Reading rally in the 9th inning fell short, only scoring 1 run. Reading lost the game 3-2.

Reading manager Steve Roadcap and substitute pitching coach Gorman Heimeuller didn't need to visit the mound once all night, as Ramirez was in control the whole way. Roadcap was pleased with his pitcher's effort. "JC gave us a chance to win. I like the way he competed," Roadcap said after the game. "He was very aggressive in the zone, especially with his fastball. His slider's vastly improved. That's a hard loss. He deserves a win."

The cool cat, Ramirez, struck out 9 Thunder batters and walked none over 8 innings. Ramirez realized his performance was a fine one and left the game with a positive outlook, despite adding one to the loss column. "Today, I was really focused on my pitches. My slider was working good," Ramirez said following the game. "I used my fastball, two-seam, to get the double plays early. I made adjustments, kept the ball down and had success."

Ramirez, the product of his Nicaraguan mother and Cuban father, is focused on proving his worth, after coming to the Phillies, from Seattle, as part of the Cliff Lee trade last December. He describes his involvement in the Lee trade as a motivator. "(Being involved in that trade) was an inspiration because Cliff Lee is a big name," Ramirez said. He added how he initially felt when he put on a Phillies uniform to start the season. "(I felt like) I had to show the people of Philadelphia that they traded for the guy who could replace Cliff Lee." Now, though, Ramirez realizes that he should simply focus on impressing the coaches and those within the Phillies organization first. "The only thing I have to do is be focused, try to keep the ball down and show the right people that I can pitch."
Thunder right-hander Andrew Brackman earned the win, his first in Double A. The 6'10" NC State grad was the Yankees' first round draft choice in 2007.
The Reading Phillies continue their series in Trenton on Friday, as Phillies' pitcher Mike Cisco will take the mound against Thunder hurler Cory Arbiso, at 7:05pm.
________________________________